Walkers are trampling on my livelihood, says farmer 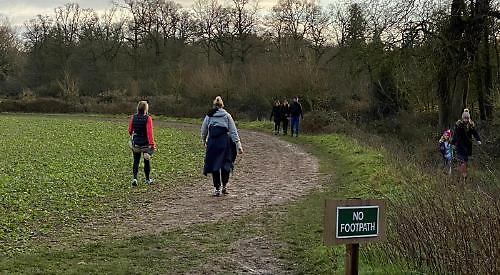 A FARMER is asking walkers to be more considerate as they are damaging his crops by straying from footpaths.

Simon Beddows, farm manager at Coppid Farming Enterprises in Dunsden Green, appreciates exercise is important to people during the coronavirus lockdown but says it is affecting his livelihood.

Some of the footpaths that run through the farm, which is owned by the Phillimore Estate, have increased from 1m to 5m in width.

Although this has sometimes been a result of social distancing, some people are simply coming unprepared for the mud and walk on the crops to avoid it.

Mr Beddows said: “It was very busy during the first lockdown, but the ground was a lot drier then so it could take the damage better.

“We have had wet winters before but we’ve never had this amount of damage and it is really down to the number of people that are walking on the crops. It is very wet out there at the moment, having had an above average rainfall so far this winter.

“The public rights of way, particularly across arable fields, are struggling with all the extra visitors and the wet weather.

“If you walked the same route every day, be it grass or plants, they would soon start to suffer and die. The grass might grow back after time but the plants, whether they are flower or vegetable, would not.

“Now multiply this by hundreds of feet and you can see what is happening to our crops when walkers stray off the given path.

“We have lots of footpaths and tracks across the farm and they’re much bigger than they should be.

“People are either walking to avoid the mud, or because they think it is helping with social distancing. I can understand both of those things but it is damaging the crop and it won’t recover.

“People are killing the crop and they’re basically walking on our livelihood and their food for next year.

“A lot of people are coming to the countryside to get exercise, which is understandable.

“But maybe they don’t quite appreciate how to go about it properly and they come ill-equipped with the wrong shoes on. If you have wellies, you’re not going to try to avoid the mud but some people have trainers on in the middle of the winter.”

Mr Beddows, who has been farm manager for the last 18 years, said most people were understanding when approached about where they were walking, but some were confrontational.

Coppid Farming Enterprises specialises in combinable crops, which include wheat, barley and oats. Mr Beddows said it was difficult to quantify the value of what the farm had lost as a result of crops being damaged.

He said: “Each field and crop is different but if you work on the basis that a crop of what would produce an average of eight tonnes per hectare and a tonne of wheat is worth about £180, it is fair to say it has impacted on some of our yields.”

Mr Beddows said there was also an issue at farms with livestock suffering attacks from people bringing dogs on to farmland.

He said: “This is not about me having a ‘get off my land’ type of approach — this is about trying to educate people.

“We don’t really have any livestock, but there have been dogs chasing wildlife and running wild and out of control.

“People with livestock have had issues and only last week there were 50 sheep killed in Wales after a dog got loose in a field.”