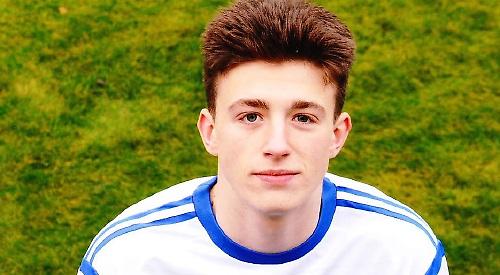 A TEENAGE footballer from Sonning Common has spoken of his joy for representing his country.

He will play his next international game tonight (Friday) against Northern Ireland at Torquay United’s Plainmoor ground tonight.

Bayliss, who plays at centre-half or left back, represents Flackwell Town in the Hellenic Premier Divison, the same league as Henley Town.

He trialled for the national schoolboys squad last season after being put forward by his Oxfordshire county coach Des Williams. Despite making the trial squad of 32 players Bayliss missed out on making it to the final 16.

“It was a bit easier when it came to the trial this year,” said Bayliss, who made it through to the 16-man squad. “You go away for a couple of days to Lilleshall and it being my second year I knew what it was like. They called me up last season when somebody got injured but I was injured myself.”

Bayliss, who studies sport and exercise science at Henley College, lives in Bramley Crescent with his father Chris and his partner Sally Sherwood.

He played at Reading FC between the age of seven and 12 before being released. He later represented Sandhurst Town under coaches Kevin Fleming and Paul Clayton. The latter was also involved with Flackwell Town, who fast-tracked him into the first-team this season.

Bayliss said: “Initially it was crazy going from playing with 17 and 18-year-olds to playing against people double my age.

“It was quite a jump but the guys at Flackwell Heath have been great with me and if I have found anything difficult they have helped me, especially with little things in my game.” Bayliss says the style of play between his men’s side and the English representative side are vastly different, but he is comfortable with both. “Men’s football is very different to what we play with England,” he said. “With England we play a passing game but it depends on the tactics of the coaches. It’s a very good standard and I’m enjoying it.”

Bayliss played the first hour of the Scotland game and hopes to retain his starting place against Northern Ireland.

In the future he hopes to follow in the footsteps of another central-defender who made a step into the big-time. He and the other players have been told about Chris Smalling, the England and Manchester United defender, who played for the side in 2008 when at Maidstone United.

Bayliss said: “It’s about giving myself an opportunity to progress as far as possible in football. I want to play at as high a standard as I can, it is what I want to do for my future career.”