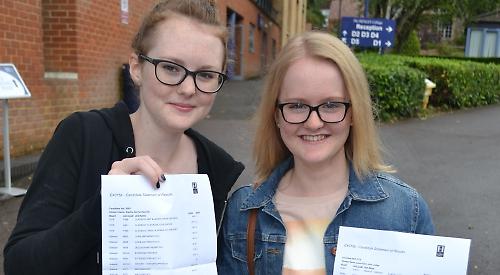 STUDENTS from Henley, South Oxfordshire and Berkshire have celebrated another excellent year of A-level results.

Schools and colleges recorded pass rates of almost 100 per cent — in line with previous years — and increases in the proportion of top grades.

At The Henley College 98.2 per cent of students achieved passes at A* to E grade, a slight improvement on last year’s figure of 98 per cent, and a record proportion were awarded C grade or above.

Most students checked their results online when they were released on Thursday last week but some visited the college’s Deanfield Road campus to open their envelopes and share the news with their friends.

High achievers included Lottie Drury, 17, from Checkendon, who achieved an A* in biology and maths and an A grade in chemistry.

She said: “I’m really happy. I was really anxious beforehand. I turned everything off as I didn’t want to know the results.”

Lottie, who planned to celebrate her 18th birthday on Saturday, will study health and exercise science at the University of Bath.

Amy Southam, 18, from High Wycombe, achieved A*s in law and psychology and a C grade in English literature. She is to study law at the University of Bristol.

Sophie Deaville, 18, from Emmer Green, was awarded an A grade for her extended project, a B in history and Cs in maths and classics and will now study classics at Royal Holloway, University of London

She said: “It’s not the best but I got into university. I already knew I had got in so it was a little bit like, ‘yay, I didn’t get the grades but I still got in’.”

Her friend Laura Judge, also 18 and from Emmer Green, achieved A grades in French and German and a C in sociology. She will study modern languages at the University of Southampton.

She said: “I already knew I had got into Southampton, which was my first choice university. I’m really happy to have got what I wanted, but I was nervous.”

Josie Kent, 18, of Manor Road, Goring, was awarded an A* in film studies, a B grade in English language and a C in history and has been accepted by the University of Winchester to study English language. She said: “I’m really happy. I checked the results online with my mum and dad on my shoulder and they were really pleased.

“I called my granny and she couldn’t believe it. She’s just had a hip replacement and ran to the phone without her crutches!

Tom Hannington, 18, from Sonning Common, has also been accepted by Royal Holloway, his first choice, to study business and financial economics.

He said: “I feel fantastic. I’m just amazed that I got in and very relieved all the hard work has paid off.”

Savio-Sachin De Jesus Patel, 18, from Caversham, achieved a B grade in maths, a C in psychology and a D in biology and will study accounting and finance at Swansea University.

Carmen Austin, 18, of Plowden Way, Shiplake, achieved a B grade in psychology, a C in English language & literature and a D in biology.

She is to study mental health nursing in Brighton.

Jon Abbott, 18, of Wood Lane, Sonning Common, achieved B grades in business and geography and a C in psychology and will study business and marketing at Nottingham Trent University.

He said he was relaxed about receiving his results as he knew that he had done well enough.

The college’s BTEC results improved with 83 per cent achieving the highest grades and 34 per cent gaining triple D* (the highest achievable grade), an increase of five per cent on last year.

Principal Satwant Deol, who took over in December, said: “We are absolutely delighted with the students’ results, particularly as they have improved in all categories from last year.

“Nearly 500 students have already had their choice of university confirmed. The majority has been offered places at top universities.

“Also this year, we have seen students progressing on to degree level apprenticeships with a whole range of employers, including large blue chip companies and small and medium enterprises.

“We know that our students will go on to make a valuable contribution to the local and national economy and to society.

“We turn out well-rounded young individuals who thrive at university or in the world of work. It has been sheer delight seeing them opening their envelopes and getting into their first choices.

“It’s a lot of hard work from the students and my staff, deputy principal and senior team. I’d like to thank the parents as well.”

At Highdown School and Sixth Form College in Emmer Green, the percentage of passes at A* or A grade increased from 15.7 per cent last year to 25.2 per cent.

The overall pass rates was just under 100 per cent with only two papers failing.

Among the highest achievers was Louis Allsop, who achieved an A* in English language & literature and in history and an A grade in biology.

Louis, of Kidmore Road, Caversham, will study anthropology at the University of Exeter.

He said: “I don’t know what my long-term goals are as I completely exceeded my expectations but I’m happy that I’ll have plenty of options. My teachers this year have been absolutely phenomenal and I couldn’t have asked for more support.”

Caitriona Dowden, of Cedarwood Crescent, Caversham, is going to the University of Oxford to study philosophy after achieving A grades in French, philosophy and history.

She said: “I was incredulous when I saw the results but very pleased. Our teachers really went above and beyond this year.”

Gideon Lewis, of Queen Street, Caversham, achieved A* in both maths and computing and A grades in further maths, chemistry and physics.

Gideon, who will study physics at Oxford, said: “I’m very happy. I was a bit nervous going into the exams so this a real relief.

“I enjoy physics a lot so I’m just going to study the course and see where it takes me.” Bertie Taylor, of The Mount, Caversham, was awarded an A* in maths and A grades in chemistry and physics.

He will studying mechanical engineering at the University of Manchester.

Bertie said: “I thought I’d only get As and Bs so this is a fantastic result. I got the same results as my older brother Harry so I’ve still got bragging rights!

“I have no idea what I’ll do after university — I’ll just see where the course takes me.”

Marina Bates, of Oakley Road, Caversham, achieved A grades in maths, biology and chemistry and will study biological sciences at University College London.

Headteacher Rachel Cave said: “Parents have told me that the quality of feedback and support their children received was fantastic.

“It allowed them to prepare well by pinpointing the areas they needed to focus on.

“We’re really thrilled for our students and most of them are very happy to have got into the universities they wanted.”

At the Piggott School in Wargrave, the proportion of grades at A* to B was a record 63 per cent, up from 60 per cent last year.

The percentage of A* to C grades was down by three points to 84 per cent. The overall pass rate was down from 100 per cent last year to just over 99 per cent.

The school scored 38 points per
A-level entry under the new Qualifications and Curriculum Authority system, which assigns points to all level 3 qualifications, including A-levels, AS-levels and BTec diplomas

In vocational exams, the proportion of distinction stars, the highest grade, was 66 per cent.

Students crowded into the school hall from 9am and many were filled with tears of joy as they opened their results envelopes to realise they had got into their first choice university. The teenagers hugged each other and their teachers.

Head boy Tom Langer, 18, from Hurst, acheive A* in maths and A grades in further maths, physics and chemistry. He will study maths and physics at Bath University.

Tom said: “It was a little emotional but I’m very happy. I hadn’t slept properly in four nights so I’m looking forward to getting some sleep!”

Brandon Forbes, 18, from Twyford, was awarded A*s in both maths and computing and A grades in further maths, physics and economics. He will study computer science at Imperial College London.

Brandon said: “I’m really happy with my results. I couldn’t have asked for much more.

“My mum was shouting and screaming when she saw them and I got a handshake from my dad.”

James Richards, 18, also from Twyford, achieved an A* in maths, an A grade in further maths and a B in physics as well as scoring 100 per cent in one of his modules. He will study mechanical engineering at Birmingham University.

He said: “The 100 per cent was in the hardest module I’ve taken this year so I’m really happy with that.”

Ashleigh Evans, 18, from Earley, was awarded A*s in physics, maths and business and an A grade in photography. She will study psychology at the University of Warwick.

She said: “I was expecting good results but not this good. I opened then in the car and my mum and I burst out crying.”

Rosalind Byard-Jones, 18, from Reading, achieved an A* in history and A grades in English literature and German.

She will study Japanese and international relations at the SOAS, University of London.

She said: “I really love the culture and language and thought I would do something different.”

Euan Woods, 18, of Recreation Road, Wargrave, is to spend six months playing cricket in Adelaide as he wants to pursue a career in the sport and his results were not as good as he had hoped for .

He alreadys represents Henley, Wargrave, Berkshire and Surrey and is a member of the England youth team.

Headteacher Derren Gray said: “Our students and staff work exceptionally hard and this is once again evidenced in each of our academic, applied general and technical results. I wish all out students the very best for their future and thank all the teaching and support staff for their continued dedication and professionalism.”

Nationally, A* or A grades were awarded to 26.3 per cent of entrants, up by half a percentage point on last year.

The percentage of boys who acheived A* or A grades was 26.6 per compared with 26.1 per cent of girls, which has reversed a trend of many years.

However, there was a fall in the number of top grades in 13 subjects due to curriculum changes and the the number of university places allocated also went down.

Oxfordshire County Council said the pass rate across the county was likely to be in line with the national figure of about 97.9 per cent.

Wokingham Borough Council said the pass rate in the borough was 99.1 per cent, up from 98 per cent last year.

Reading Borough Council said a full breakdown of its results was not available yet.

“I would like to congratulate them for achieving results which clearly demonstrate the hard work put in by both pupils and their teachers.

“I wish young people the very best for the future as they move on to the next phase of their lives, whether it be in higher education, training, apprenticeships or employment.”