'Accident was waiting to happen' 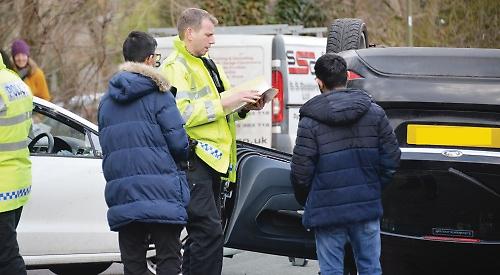 RESIDENTS have formed a campaign group to stop dangerous driving by students from The Henley College in the surrounding streets.

It follows a crash last week in which a Ford Fiesta driven by a student overturned in Deanfield Road after colliding with two parked cars.

The residents plan to lobby the college, saying the problem has existed for several years and they are worried that someone could be injured or killed. They want staff to monitor the students’ driving and parking more closely.

Nicola Gordon, who lives in Deanfield Road, began rallying her neighbours after the accident outside her house.

She walks along the road every day, taking her five-year-old daughter Beatrice to Valley Road Primary School and usually has her other daughter Emma, two, with her too.

Mrs Gordon said: “Unfortunately, more often than not, the speeding is by students at the college. People have been raising it regularly with the police for a number of years.

“What happened last week has brought it back up and something has to be done. When you see the pictures, it’s quite horrific. Hopefully it will make the people in authority realise something needs to be done.”

She said: “We need to know what the college is going to do in the immediate future. It can help by doing more of its own policing. We want them to look at that and acknowlege the problems in the road.”

Richard Cartland, of Deanfield Road, said: “Driving and parking are a problem and they compound each other.

“There is no police presence in Henley anymore so there are no penalties for what they are doing.

“I am trying to convince the college they need to be responsible for the students inside and outside the college.

“I showed the principal the photographs of the incident and she was shocked.”

Mr Cartland, who has lived in the street for more than a decade, said the area needed to be monitored by college security staff.

He added: “I’ve suggested one comes down to Tilebarn Lane and the other goes down the bottom of the road and they communicate by walkie-talkie.

“Ninety-eight per cent of the students are fine but it’s the two per cent letting the rest down. They are not necessarily speeding but it’s the way they accelerate.”

Mike Phelan, also of Deanfield Road, says there have been other crashes involving college students recently and he witnesses students flouting parking laws every day.

In a letter to this week’s Henley Standard, he says: “The parking problem is easy to spot but the dangerous driving is another matter altogether.

“I was once on the receiving end of threatening behaviour from students after remonstrating with them regarding dangerous driving. Residents witness it daily. Examples are racing at the speed bumps and breaking hard at the last moment to avoid ‘grounding’, driving around the speed bumps with near-side wheels on the pavements and at little reduction in speed and multiple wheel-spinning circuits of the roundabouts which leave the smell of burning rubber in the air for some minutes.

“All this is often accompanied with shrieks of excitement and in-car stereo system operation at volumes that can be heard 50 yards away.

“Without action I fear someone will be killed and it will most likely be a young child who does not understand the danger.”

Mr Phelan, who has raised the issue with the college’s chairman of governors Peter Le Conte, Oxfordshire county councillor Stefan Gawrysiak and Henley MP John Howell, has suggested having regular foot patrols in the area by college staff and the police, double yellow lines at all junctions and a 20mph speed limit.

But he says: “What do I expect to be done? Absolutely nothing, at least in the short term, because no one has any money for preventative action.

“However, there are duties to the public which cannot be ignored forever, so I expect some action soon.”

Mark Davies, of Valley Road, says he has also witnessed dangerous and inconsiderate driving by students.

“It’s an ever-increasing problem,” he said. “Alongside the driving incidents, we have the problem of litter being left on the ground around parked student cars.

“The college appears to do little or nothing to combat the negative effects any of this has on the surrounding community, one that it’s happy to boast about in its prospectus.

“Every day some cars zoom along Valley Road at speeds way over the speed limit, showing no appreciation for the families who live there.

“Thank goodness there hasn’t been an incident involving any of the children or parents who walk these routes each day on their way to school or nursery at Valley Road or Gillotts.”

Neda Mowatt, from Henley, says she was too scared to walk in the area at certain times of the day.

She said: “Inconsiderate parking, aggressive driving, overtaking and even donut turns along Deanfield Road are a daily occurrence by certain Henley College students.

“It is only a matter of time until a pedestrian is injured from poor driving and the council must consider further traffic-calming measures to slow traffic along this stretch of road.”

A college spokeswoman said: “The college is liaising with residents and we will fully support any measures to calm traffic and address parking issues.”

Last week, the college said it was speaking to the local community “about what measures we can put in place to help to minimise any potential risk in future”.

It added: “We communicate regularly with our students about safety and value our community partnerships, so looking at ways we can engage positively with local residents and the police to ensure road safety is our priority.”