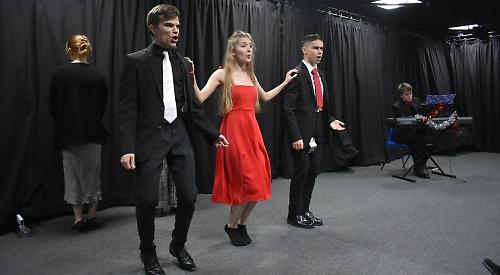 Students from The Henley College performed songs from the musical Cabaret at the 10th night of this year’s Henley Living Advent Calendar.

Six cast members sang in front of dozens of guests, including their principal Satwant Deol and Henley Mayor Glen Lambert, at the college’s drama hall in Deanfield Avenue.

Set in Thirties Berlin, with the Nazi Party growing into a mass movement, the 1966 musical has been chosen as the college’s Christmas show and will be staged from Wednesday next week to December 19.

Among the songs performed on the night were “Willkommen”, “So What?” and "It Couldn't Please Me More (A Pineapple)".

During a rendition of “Money”, the students also performed a dance routine and moved around the audience.

Refreshments were provided by Badgemore Park, while there was also a raffle with prizes including tickets to next week’s shows, a signed Mary Berry cookbook and membership to the Henley Literary Festival’s Friends of the Festival group.

The night was raising money for the college’s Bright Futures scheme, which supports those with mental health problems.

Organiser Richard Rodway said: “It’s nice to involve another institution, we’ve been to the college before but it’s good for them to embrace it and take ownership.

“When they’ve got such talented students, for them to put on a show was great and, again, it’s something a bit different.”

“We are really proud to be part of the community, that’s our whole ethos and we love the support we get from Henley residents.

“I’d like to thank the community for turning up, the staff and our students for performing brilliantly.”

Tomorrow’s (Tuesday) performance will take place at the Kenton Theatre in New Street.

For a full round-up of the second week of the calendar, with pictures, see this week’s Henley Standard, out on Friday.