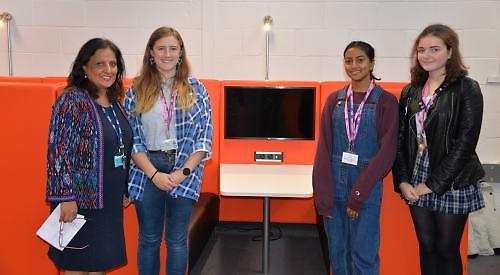 A HUB has been opened at The Henley College which is designed to improve students’ career prospects.

The Cuthbert Suite at the Deanfield campus is named after Simon Cuthbert, the former deputy principal, who died in May following a short battle with cancer, aged 54.

The £1 million digital skills and enterprise hub was unveiled by college principal Satwant Deol and Mr Cuthbert’s widow Penny by cutting a ribbon.

Mrs Cuthbert, who is the vicar at St John's Church in Caversham, spoke about her husband's passion for the college during more than 30 years working there. She said: “My [three] boys and I are really deeply moved and proud of what this would have meant to Simon.

“It is almost a year to the day that Simon came home from work feeling unwell.

“We still can't quite believe he has gone but we are so grateful to everyone for the compassion and love they showed us.

“Simon loved The Henley College. The reason he stayed here for so long was because he felt like it was a family.

“It is lovely that his memory has been honoured in this way. Everything that he did was for the students. He wanted to enable them to flourish and help them fulfil their potential.” Mrs Cuthbert was presented with a book of condolences with messages and pictures from staff and students by Mrs Deol.

The Oxfordshire Local Enterprise Partnership secured £500,000 in government funding to put towards the hub which has wi-fi and smart screens in all the booths to allow groups of students to work together and deliver presentations.

“I am so pleased that we were able to make his dream come true. He was a devoted and key member of staff. The opportunity to deliver 21st century skills for our students will not only help their employability but also ensure their future success.”

The ceremony was attended by Henley Mayor Ken Arlett as well as governors and Helen Midford, who was Mr Cuthbert’s personal assistant for five years.

Mrs Midford, who retired at the end of July, said he was “the person you turned to in a crisis” and his ethos was “all about the students”.

Mr Cuthbert joined the college in 1987 as a physics teacher and went on to become the department head, head of faculty and, finally, deputy principal.