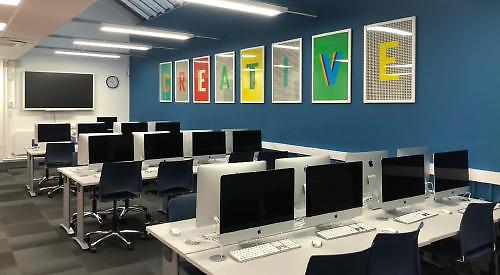 A NEW £1 million media suite has been unveiled at The Henley College.

It is equipped with 50 new Apple Mac computers with the latest media software and has new seating areas, including two booths where students can connect their laptops to a television screen for group project.

The suite can also be divided into two classrooms. It was officially opened at a virtual ceremony on Tuesday attended by more than 30 people, including college staff and governors and representatives of the Oxfordshire Local Enterprise Partnership, which provided match funding.

Sarah Wilson, who teaches the creative media production course at the college, started the event with a tour of the new facilities.

She said: “It’s a beautiful space and has really helped our students. It’s more than just a classroom where students can learn, it shows them what it’s like to work in a big office space. I am really proud.”

Dr Trevor Watkins, the college’s chairman of corporation, said: “The media suite has worked well and students and staff are really impressed with the facilities which are helping students with their studies and their work lives after they leave the college.” Principal Satwant Deol thanked the enterprise partnership for the investment and said: “It has really transformed our creative performance hub.

“These state-of-the-art facilities look like the Google offices. We’ve had more students in there than ever before.”