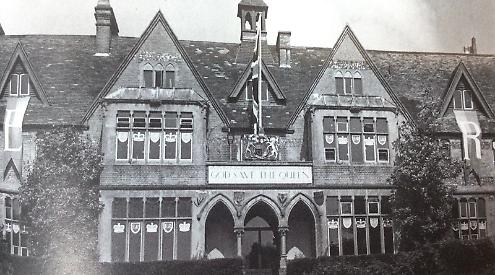 A PHOTOGRAPH to mark the Queen’s coronation was recreated to mark her platinum jubilee.

The original picture was taken at Henley Grammar School in1953.

Four pupils from that time came back to what is now The Henley College for a commemorative photo on the lawns at the Rotherfield campus.

The former students were handed gifts from Waitrose, including flowers for the women, and a copy of The Story of The Henley College by Gemma Allen in which the original picture appears.

Ross Tristan, 82, who was head boy in 1958 and governor for six years in the Noughties, said he had enjoyed his schools days.

He said: “Coming back for a celebration like this is the least I can do to put something back. This school started me on my ways.”

The grammar school was formed in 1892 and became a college in 1987. In 2010 the tertiary college was granted sixth form college status.

A reunion of former pupils and staff of the school will held in July, having been delayed for two years by the coronavirus pandemic.