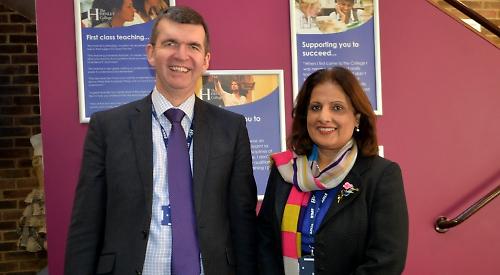 THE new principal of The Henley College says she wants to encourage more young women into science and engineering.

Satwant Deol, who began work on Monday, was previously managing director for education and skills at Highbury College in Portsmouth.

She takes the reins from deputy principal Simon Cuthbert, who has been running the college with two assistant principals on an interim basis following Jayne Davis’s departure in March.

Mrs Deol said: “First and foremost, I want to get to know my students, staff and the wider Henley community which we are part of.

“I also have aspirations to get more young women into science, engineering and technology subjects, which is something I’m passionate about.”

Mrs Deol, who is married with two grown-up children and has lived in Maidenhead for more than 25 years, grew up in Punjab in India and moved to Nottingham with her parents in 1970.

She studied computer science at the University of East London then sat a master’s at Aston University in Birmingham before becoming head of computing at Coventry University in 1984.

In 1996 she moved to Ealing, Hammersmith and West London College, where she had a number of roles, including vice-principal for curriculum and quality and director of planning and innovation.

She was later vice-principal for curriculum and quality at Stratford-upon-Avon College before working as a freelance consultant to schools and colleges.

Mrs Deol was interviewed for the role at Henley in September.

She said: “The interview was very competitive and I was absolutely delighted to get the job because it’s an amazing college.

“It has a diverse student body and is very forward-looking as it isn’t just interested in grades but also developing students who are fit for the 21st century.

“It gives students confidence and encourages logical, creative and inventive thinking, which is important as young people are now likely to have many jobs throughout their lifetimes.

“It isn’t a school but it’s such a warm and nourishing environment. I find education very rewarding as it’s a chance to give back to society and watch young people achieve their potential.”

Mrs Davis, who became the college’s first permanent female principal when she took over from Tom Espley two years ago, stepped down following a change in her family circumstances.