Miss Kiddy’s mob and the Godfather of swing 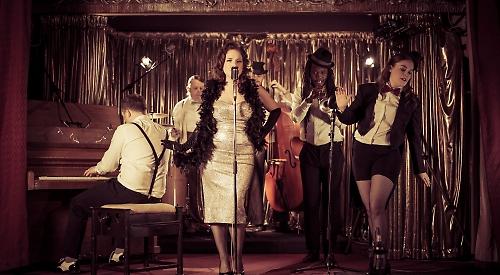 A SINGER and her band of “gangsters” are among the jazz acts to perform at this year’s Henley Festival.

Miss Kiddy and the Cads will stage their Forties-style music review at on the Sunday of the annual five-night event in July.

Their show will tell the story of the group’s vocalist and how her band of seemingly unseemly characters got together.

Other acts to perform at The Jazz Club venue include “pop-noir” singer Purdy, from Nettlebed, Ray Gelato & The Giants, Yolanda Brown, King Pleasure & The Biscuit Boys and Opera Prelude.

Meanwhile, members of the National Youth Jazz Orchestra will be performing a set each night from Wednesday to Saturday.

She is backed by a notorious ensemble of musicians formed by the most wanted, shady characters on the music scene, one of which is a tap dancer.

For their performance, the venue will be stylised like an American jazz club in 1945. The audience will be taken on a musical journey through the life of Miss Kiddy set to a vintage soundtrack of contemporary songs.

As the story unfolds, the individual “mafiosa” characters of the fiendish cads come to life and the audience warms to this unexpected “family” of jazz rebels.

Gilchrist says: “Miss Kiddy is the main character and the Cads are her family. The show is all about their story and how they live their life — they are gangsters in America in the Forties.

“I am in charge and the singer and each individual band member is a different character. The drummer is called “Daddy Beats” and is our getaway driver. It is like an autobiography and musical review.

“The songs that are in the show are there to explain different things. There is dialogue that runs all the way through — little quips — but it’s not like a play. It is a bit of context for reference.”

The set-list will feature well-known songs including choice cuts by the likes of David Bowie, Beyoncé and Blur.

Gilchrist said: “Each song is about something that has happened previously. We perform Michael Jackson’s Billie Jean, which is supposed to be about one of my previous lovers, while Place Your Hands by Reef will be done in a gospel, New Orleans-style, as if you have come to worship Miss Kiddy.”

The group was started in 2016 after Gilchrist was thinking of a new concept to incorporate her love of singing and acting.

Gilchrist says: “I had been thinking about it for a couple of years and the idea grew out of when I got together with the guys who ended up in the band. It is all about the music and putting a new spin on some of the greatest pop songs in a jazz and swing style.

“I also love being a different character. I trained as an actress and singer but never found an outlet for my acting and singing together and there was always a little part of me who wanted to have an alter ego.”

She began her music career as a classical singer after taking a scholarship at the Guildhall School of Music. She continued her training at the London School of Musical Theatre.

In 2006, Gilchrist started singing in jazz and soul bands and her voice has featured for both sung and spoken session work on TV and film. She can currently be heard singing the theme tune on the CBeebies series Do You Know?

Gilchrist also works with a range of professional and community choirs and leads vocal workshops across the country. As a session musician, she has worked with previous Henley festival alumni Joss Stone and Ronan Keating and this is her first time attending.

Miss Kiddy and the Cads will be performing on Sunday, July 15, from 10.30pm and Gilchrist adds: “I am very excited”.

Meanwhile, Ray Gelato, known as “The Godfather of Swing” will play on Wednesday, July 11 at 10.45pm.

He is one of the last great jazz entertainers and bandleaders and the sax man and vocalist will be appearing alongside his foot-stomping band, The Giants.

Singer-songwriter Rebecca Poole, who uses the stage name Purdy, will take to the stage on Thursday, July 12 from 10.45pm. Following the release of her debut album, Diamonds in the Dust in 2015, her profile continues to rise following a supporting slot for Jools Holland and his Rhythm & Blues Orchestra on his UK tour.

Her playful swagger and onstage appeal has nuances of Nina Simone, Nancy Sinatra and Peggy Lee and she has performed at Wembley Stadium, the Royal Albert Hall and BBC2’s Cheltenham Festival.

Poole’s most recent success has come in the form of her monthly pop-up jazz club at the Henley Amateur Operatic and Dramatic Society studio in New Street, Henley, next door to the Kenton Theatre.

Double MOBO award-winning Yolanda Brown is known for seamlessly blending jazz, soul and reggae. She will be playing from 10.45pm on Friday, July 13.

Her appearance is part of her Love Politics War worldwide tour, which celebrates 10 years in music.

Brown has toured with Diana Krall, The Temptations and Billy Ocean and has collaborated with the likes of Snarky Puppy’s Bill Laurence, Bob Marley’s son Julian and the Royal Philharmonic Concert Orchestra. She was also invited to meet the Queen and the Duke of Edinburgh at Buckingham Palace.

King Pleasure & The Biscuit Boys have played nearly 6,500 gigs in their 30-year career, making this jump, jive and swing band something of an institution. They have performed in 21 countries and have played with the likes of B.B. King, Cab Calloway, Ray Charles and the original Blues Brothers band. They will be playing on Saturday, July 14 from 10.45pm.

Opera Prelude opens the club at 6.30pm on Sunday, July 15, which is a charity that supports the next generation of operatic talent. It is dedicated to giving young singers a start through coaching and help with expenses.

Four members of the National Youth Jazz Orchestra will perform nightly from July 11 to 14 from 6.15pm, bringing with them jazz tunes both old and new.

The orchestra was founded in 1965 and is a 23-piece ensemble made up of the best young professionals in the country.

• The Henley Festival is a black-tie event which celebrates music and the arts and will take place from July 11 to 15.

For more information about what’s on and to buy tickets, call the box office on (01491) 843400 or visit www.henley-festival.co.uk