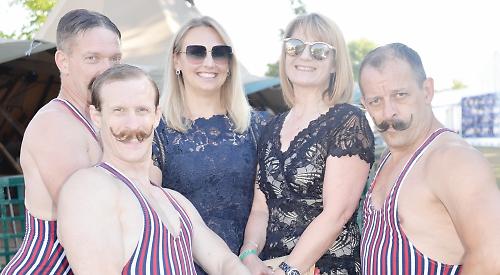 THOUSANDS of people were dressed in their finest as they watched pop star Rita Ora — and England’s World Cup semi-final — at the opening night of this year’s Henley Festival.

Organisers of the music and arts event installed a series of TV screens at the riverside site so the visitors in dinner jackets and ballgowns could watch the match against Croatia and not miss the main “floating” stage act, singer Rita Ora.

The TVs were in the boat tents at one end of the site and the festival was “managed” according to how the game was going.

Many festival-goers arrived early to take in the football and other attractions, which included street performers, art installations and takeaway food and drink.

The temperature was around 24C as Ora, 27, took to the stage. She is best known for her hits How We Do, I Will Never Let You Down and Anywhere.

The other headliners this week are disco legend Nile Rodgers and his band Chic, jazz singer Curtis Stigers with the Ronnie Scott’s Big Band, Grace Jones and the English National Opera.

Several local restaurants have pop-up versions at the festival, including the Spice Merchant in Henley and the Crooked Billet in Stoke Row, run by Paul Clerehugh.

The festival is also celebrating the 200th anniversary of the neighbouring Leander Club.

Eleven of the 200 miniature hippos which were decorated to mark the bicentenary have been hidden around the site for guests to discover.

Tickets for some nights of the festival are still available. For more information, visit www.henley-festival.co.uk