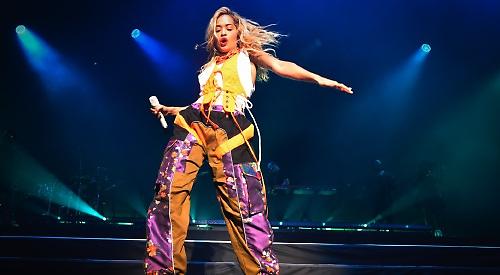 RITA ORA lifted the spirits of disappointed football fans on the opening night of this year’s Henley Festival.

The popstar’s sell-out performance was delayed until after extra-time had finished as England lost to Croatia in the World Cup semi finals.

Ora joined thousands of black-tied and ballgowned guests in the Henley Royal Regatta boat tents to watch the game before starting her performance.

More than a dozen screens had been attached to the boat racks and crowds gathered before the star’s performance to watch the match.

The singer started her performance shortly after 10pm. As she was driven up in a 4x4 the crowd screamed and frantically waved at the singer as she made her way up to the stage.

Ora was introduced by the festival’s artistic director Stewart Collins, who promised the singer would lift the crowds’ spirits after the football result.

He said: “The boys did well. If anyone is disappointed that is going to go out the window with Rita and her band.”

She was joined on stage by a troupe of dancers, dressed in black cycling shorts and vests, for most of the performance.

Ora opened with Your Song and after finishing complimented the crowd on how “beautiful” they looked.

She followed it up with 2014 number one I Will Never Let You Down, Body on Me and Summer Love.

Ora then confessed she had a gown to wear and had thought about wearing it. Instead she wore patterned "balloon" trousers, orange trainers, a white vest and an orange waistcoat.

Later in the performance she swapped the vest for a white bralet.

She then performed her latest single Girls and Doing It, a collaboration with Charli XCX.

Ora then dedicated her performance of Lonely Together, to Swedish DJ Avicii who took his own life earlier this year, who she collaborated on the song with.

After the song finished she shouted out a group of teenagers who she watched the football with. “Shout out to those 15-year-olds, who were giving me life,” she said.

Ora followed it up with Black Widow and 2012 number one Hot Right Now, the first single she released when she featured alongside DJ Fresh.

She told the audience: "This song changed my life". Towards the end of the song she jumped off stage and mobbed by fans behind the railings in the front row.

Ora closed her set with recent singles For You and Anywhere.

The performance, which lasted an hour, ended at 11pm and was followed by the traditional fireworks display, which have returned this year.

Crowds danced along and were on their feet throughout the performance. Some revellers climbed onto friends shoulders to get a better view.

This morning (Thursday) Ora tweeted to praise the crowd for their energy.

She said: “Everyone was in such good spirits even though it’s not coming home we had a lot to be proud of today.

“Thank you England you brought us all together! Next time we will bring it home! Also what an incredible crowd tonight!! Mwah!”

Ora follows a string of songstresses to open the festival in recent years, following in the footsteps of Jess Glynne and Jessie J.