Luck had nothing to do with it 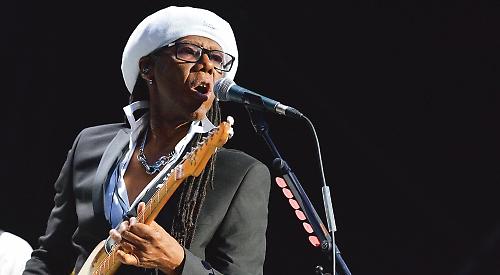 IN seven years of attending the Henley Festival, Nile Rodgers and Chic’s headline performance last Friday was by far the most energetic I’ve witnessed. The funk and soul legend, who was accompanied by his six-strong band and glamorous vocalists Kimberly Davis and Folami Ankoanda-Thompson, was so hotly anticipated that spectators were on their feet before a single note had even been played.

Any sense of formality arising from the black-tie dress code instantly evaporated as the musicians launched into a trio of Chic originals — Everybody Dance, Dance Dance Dance and I Want Your Love.

Having warmed up the audience, Rodgers told them: “This may be the most amazing crowd I’ve ever seen in my life. Whoever came up with the concept of a black tie festival is a genius — you guys look like the cover of a Chic album!”

He showcased his talents as a songwriter and producer with a medley of I’m Coming Out and Upside Down, both originally performed by Diana Ross, and Sister Sledge’s He’s The Greatest Dancer and We Are Family.

The setlist then flashed forward a decade as the group performed Eighties hits Like A Virgin by Madonna and Notorious by Duran Duran, the latter of which saw the occupants of passing boats waving bright white lights in time to the music.

By this point, the sun had set and the audience were bathed in brilliant white spotlights from the stage as they danced away with increasing abandon — lubricated, no doubt, by the copious amounts of champagne that were flowing.

Despite his obvious talent, Rodgers generously shared the limelight with his fellow musicians. He frequently left the singing to Davis, who showcased some blinding vocal acrobatics in an extended a cappella outro to the Seventies medley.

Of course, Rodgers himself was no slouch on the musical front. He didn’t play a single note that could be considered a guitar solo, instead showcasing his virtuosity through the intricate watertight rhythm work that has become his trademark.

The lead instrumentation was played by bassist Jerry Barnes, who stood shoulder to shoulder with his bandleader while slapping and popping some seriously funky licks.

Some of the loudest cheers went up for the band’s cover of Get Lucky by Daft Punk, which Rodgers revealed he wrote with the French duo and Pharrell Williams while recovering from cancer.

Following the inevitable rendition of Chic’s 1978 signature hit Le Freak, the show closed in true disco style as about 50 spectators were invited up on stage to dance to the closing number Good Times. The sense of fun was so infectious that security were kept busy stopping others from climbing up and joining them.