Selfie star Rita was an education 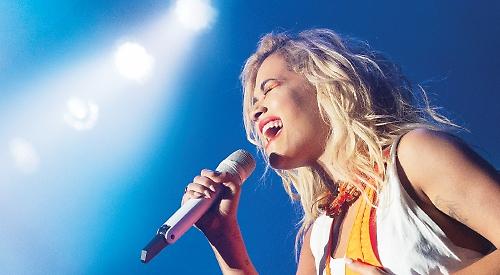 THE organisers of the Henley Festival knew they were on to a winner with Rita Ora for the festival’s opening night.

She continues the tradition of female chart-toppers taking to the Floating Stage on the Wednesday evening — after Jessie J in 2015 and Jess Glynne last year.

All three have been sell-outs, or near enough, and may attract the younger generation of festival fans who live in and around Henley.

Many under 25 will not have heard of other headliners like Grace Jones or Curtis Stigers, but Ora was always going to attract a broader crowd — in age at least.

The bouncy and energetic audience, despite England’s loss in the World Cup semi-final earlier in the evening, were treated to a bravura display of electronic dance-infused modern pop.

Ora addressed the audience almost straight away, after her opening number Your Song, saying the crowd were all winners despite the result.

She was in the boat tents to watch the game with thousands of others, although she was permitted a more casual attire then the rest of us — both in the boat tents for the football and on stage for the performance.

The audience would have had reason to leave feeling suitably positive.

The crowd on the lawn had been on their feet since the start of the set and it stayed that way throughout. Some even clambered on to others’ shoulders to get a better view of the stage.

Partway through the set she asked the audience if they wanted a collection of dance or slow songs — they opted for the former.

They had been warmed up on her tracks I Will Never Let You Down, Body on Me and Summer Love.

Ora followed up with new single Girls and Doing It. Her singing throughout seemed effortless and was never lost in the mix of guitars, drums and backing vocals.

When she fancied hitting a more extravagant note, and there were a few thrown in throughout the set, the crowd would applaud and scream in appreciation.

Despite the performance not including a traditional ballad there were some softer moments.

Later in her show she dedicated her rendition of Lonely Together to Swedish DJ Avicii who took his own life earlier this year. It was the final single he featured on before he died.

Ora finished off with Hot Right Now, the first single she released when she featured alongside DJ Fresh, followed by two recent singles — For You and Anywhere.

For the first she jumped off stage and was mobbed by dozens of fans behind the railings. It was the aforementioned younger audience’s way of showing appreciation for her performance.

Some may have also tried to snag a selfie with the star before she got back on stage for the final two songs.