Opera more than earned its place 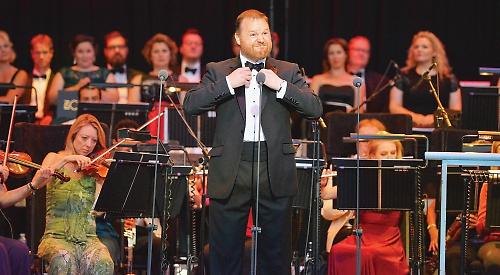 THE Henley Festival’s erstwhile disbanded classical night has always been controversial, not helped by a premature cry of “wolf” about poor ticket sales with two weeks still to go. Was Sunday the best option for such a programme? Was opera the right choice? The proof is ultimately in the pudding. On the night, audience numbers looked to have easily exceeded expectations.

The main ENO event on the floating stage was preceded at the Jazz Club by protégés of local charity Opera Prelude. This was tough on them. Despite their heroic efforts on stage, the disturbance around them made any true appreciation of operatic arias a remote pipe dream.

Waiters and waitresses creaked noisily around the wooden floor and across the front of the stage, while boorish social groups used the bar’s facilities for loud get-togethers, impervious to others’ sensitivities. Classical music simply doesn’t cut it without the right environment.

The same, fortunately, did not apply to the ENO on the Floating Stage, who benefited from a 40-strong chorus, a full symphony orchestra under music director Martyn Brabbins, top opera soloists and amplification. Their repertoire spanned some of the world’s finest operas.

The evening was held together by ENO’s witty master of topical adaptations, Richard Suart who, in addition to his amusing introductions, would later wow a receptive audience with his version of “I’ve got a little list” from Gilbert and Sullivan’s The Mikado, written specially for the occasion.

The seasoned orchestra showed their class in the opening piece, Strauss’s Die Fledermaus, one of the great operatic overtures, bursting with Viennese melodies and dances. Three principals then appeared in various permutations, supported by the ENO Chorus. And what a treat this was.

The rich, Terfel-like timbre of Berkshire-born baritone Roland Wood resonated to wonderful effect in the prologue from Leoncavallo’s Pagliacci, in the seduction scene from Mozart’s Don Giovanni with soprano Natalya Romaniw, and in the “Toreador” from Bizet’s Carmen. He was later joined by Peter Auty in Bizet’s fabulous duet The Pearl Fishers.

Natalya Romaniw proved Roland Wood’s equal in terms of power, range and dramatic portrayal. She could sing wittily, as in the “Drinking Song” from Verdi’s La Traviata with Peter Auty, and in the Don Giovanni seduction scene with Roland Wood. Her rendition of “One fine day” from Puccini’s Madam Butterfly was sensational.

If anyone was stretched in this feast of opera’s finest it was perhaps tenor Peter Auty, whose vocal capacity could not quite match that of his two counterparts. He was nonetheless a highly accomplished performer, whether in the “Drinking Song” duet from La Traviata or in the aria from Rigoletto.

To his credit, he exceeded even his own expectations in Puccini’s Nessun Dorma, pitted rather unfairly against the legendary Pavarotti version from yesteryear many of us still have ringing in our ears. The crowd loved it.

Other highlights were the Chorus of the Hebrew Slaves from Verdi’s Nabucco and the Easter Hymn from Mascagni’s Cavalleria Rusticana, while the ENO orchestra gave us a turbulent taste of the sea in the Storm Interlude from Britten’s Peter Grimes.

To round things off, even as the stage was still pulsating with the vibes from Nessun Dorma, something else was needed to bring all the singers and players together for the finale.

This came neatly in the form of the “Toast to Champagne” from Die Fledermaus. It was performed magnificently by all three soloists and chorus and brought a rapturous audience to its collective feet.

There could surely be no clearer message that classical music has a rightful place in the festival and that a permanent slot should be reserved for it.