Festival’s stars are saying ‘thank you for the music’ 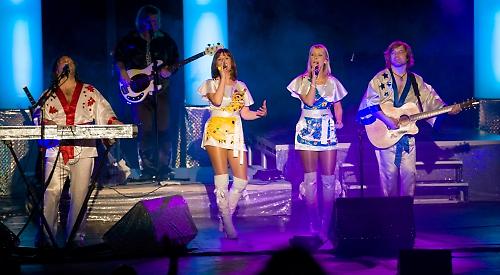 LOVE it or loathe it, the Eurovision Song Contest has been a fixture in the cultural calendar for 64 years.

That’s a lot of music. But if you were to ask virtually anyone who the contest’s greatest ever winners were, it would be no contest.

After storming to victory at the Brighton Dome with Waterloo in 1974, Swedish four-piece ABBA went on to conquer the world and establish themselves as one of the greatest pop bands of all time — before splitting in 1982.

Last year it was reported that the group members — Benny Andersson, Anni-Frid Lyngstad, Agnetha Fältskog, and Björn Ulvaeus — were working on a television special set to air later this year on BBC One.

The band had also worked on two new songs, the release of which has since been set back, with rumours of a third song being added.

But even if ABBA were to end up making a new album — the dream scenario for their millions of fans — they would be most unlikely to tour.

Fortunately, for more than 30 years now, a ready alternative has existed in the form of Australian tribute act Björn Again.

Having previously played the Reading Festival to great acclaim, Björn Again will this year headline the Henley Festival’s floating stage on Saturday, July 13, at 8.45pm.

A spokesman for the festival said: “The internationally acclaimed Björn Again show was created and founded in 1988 in Melbourne by Australian director and musician Rod Stephen.

“The enduring appeal of ABBA is reflected in the ongoing success of the Björn Again show having amassed 5,000 performances in 72 countries in 30 years. Be sure to bring your dancing shoes and fellow Dancing Queens for an evening of fun at Henley Festival!”

With a track record like that, it’s no surprise that Rod Stephen well recalls how he and his colleagues first came to pay tribute to ABBA.

“It was 1988, and none of the groups I had been in amounted to anything,” he says. “I felt like doing something different and thought of a parody band.

“I had three choices — Queen, the Beatles or ABBA. Growing up in the Seventies I already had the flared trousers, so picked ABBA.

“I got together a group of musicians and we spent months rehearsing and watching videos of ABBA — then came our first gig.

“It was at a pub in Melbourne, and the only publicity was on the chalk board outside — ‘ABBA tribute band here tonight’. We had 350 people in, they couldn’t hold any more!

“We were invited back the next month, and before we knew it we were performing quite a few nights of the week in either Melbourne or Sydney and the media picked up on us. We were even booked for a tour of Sweden, the UK and Ireland, and it was the same in every venue — a sell out! In fact, our reputation preceded us. When we arrived in the UK the media were there as the plane landed and we got changed into the ABBA gear to leave the plane. We didn’t know England too well, and from arriving we went straight on to the Jonathan Ross Show on TV in London. Then we had to drive through the night to Wakefield to get to our first gig.”

Other than the groups already mentioned, who were his musical influences?

“I was probably more into the rock scene than music like ABBA. The main group who I liked at the time started off as a New Zealand group called Split Enz. You probably know them better as Crowded House. It was not just their musicality and vocals, but also they opened my eyes to the theatricality of pop music. I remember seeing them once live and the entire stage looked like a front room, the keyboard player was playing with a standard lamp behind him.”

What can this year’s Henley Festival audience expect from Björn Again? “All the great well-known ABBA hits and some of the others they can sing along to. With Björn Again in authentic costumes. Hopefully like Agnetha we can get everyone dancing in the aisles.”

Speaking of whom, there is a picture of Rod and Agnetha on Björn Again’s website. What do ABBA make of the band?

“The time I met Agnetha was a surprise for me — it was during one of our tours of Sweden and we had been booked for a private event.

“It was only after the soundcheck when we were relaxing with the organisers that someone said the guest of honour was there.

“When I asked who it was, they said that was why we were booked — the company’s CEO was going out with Agnetha and she was there.

“I said I would love to meet her and then, while I was on the phone backstage, I suddenly realised someone was standing next to me — it was her. We chatted and that show I wasn’t needed on stage and so I watched — and she really enjoyed herself.

“We have also met Benny and Björn, and on one occasion they kindly helped us out when a piece of equipment failed and they had another one we could use. They have actually been very friendly towards us and in the past on some occasions we have been involved in their album launches.”

Looking ahead to July 13, is this the first time Rod has appeared at the festival or on a “floating” stage?

“It’s the first time we have appeared at the Henley Festival, and we’ve performed on floating stages — though I hope it doesn’t put us too far from the audience.

“We did make an appearance just up the Thames at the Reading Festival in 1992. I had this call from my agent to say we were needed to play the Reading Festival, and I said ‘Needed why?’ Apparently it was one of the late Kurt Cobain’s requests that we open for Nirvana.

“It was a great gig and that night we really rocked the ABBA hits. To this day, I can still remember the cheers of the crowds.”

• Tickets for Björn Again at the Henley Festival are priced from £65 to £135 with a £10 concession for under-18s (plus booking fee). For more information and to book, visit www.henley-festival.co.uk

1. When did you first discover your love of music?

“I grew up in Melbourne, and in addition to hearing the well-known European and American groups, we had weekly programmes on the television like Countdown, which profiled the top bands from Australia and New Zealand. I was working in metallurgical research during the day and playing guitar or bass in average bands on a Friday and Saturday evening.”

2. You have performed in 71 countries around the world, but is there a country or venue you would still love to perform in?

“Personally, I would love to perform in the Seychelles or Cayman Islands. But the festival that everyone is telling us we should perform at is the Festival International de Benicassim in Spain. Maybe one year we will make it!”

3. You still perform with Bjorn Again, but if you had a chance to sing a duet who would it be with?

“Ever since we opened for Nirvana at the Reading Festival, I have been friends with Dave Grohl. He is probably way too famous to do it, but I would so love for one day him to come and play guitar or drums behind us at a gig.”

4. Have any of your children gone into music?

“They both play musical instruments — my daughter the violin and my son the recorder — but they haven’t gone into the industry. My daughter works in the photo library of an oceanographic company and my son is at university studying to be a vet. With the films and the musical Mamma Mia!, Abba is really popular with their generation. They got tickets for their friends when we toured and then went off to ‘ABBA parties’ afterwards.”