Festival comedian is going beyond left and right 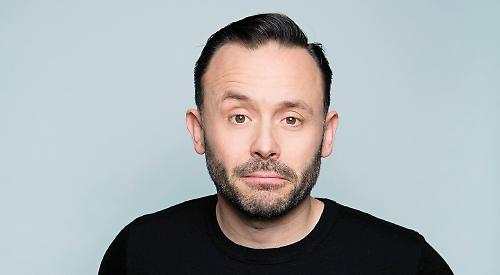 THE German philosopher and poet Friedrich Nietzsche famously ventured “beyond good and evil” in his consideration of morality, writes Peter Anderson.

Now a comedian who made his name by coming out as a Tory voter is going beyond left and right party politics and Brexit at the Henley Festival tonight (Friday).

Geoff Norcott will be previewing his Edinburgh show “Taking Liberties” in the Salon Comedy Club at 9.15pm. The other comics on the bill are Julian Clary at 7.30pm and Vikki Stone at 10.45pm.

The title of Geoff’s new show came, he says, from the realisation that the main thing that motivates his political persuasion is that he hates being told what to do.

Whether it’s Eurocrats, ministers, cultural icons or his wife of 15 years, Geoff just can’t stand anyone having power over him.

It’s a bad time to feel this way. With a supposedly Conservative government adding to the burden of “nanny state” legislation and ever greater controls on food, lifestyle and language choices, “Taking Liberties” is both a statement on what Geoff fears is happening and his intent to playfully push the envelope.

“I like to come at serious subjects in a playful and provocative way, says Geoff, who has found himself in demand as a social commentator following the success of his 2016 Edinburgh show “Conswervative”.

“I don’t want to upset anyone, but I do enjoy flirting with the line. I’m able to be a lot more blunt in live shows than in articles or on telly.”

Do the yawning divides in UK politics make it hard to be a political comedian at the moment?

“I’d like to say yes and that I’m incredibly brave, but the great thing about actual audiences is 99 per cent are grown-ups. It’s not weird for people to have someone talk to them who sees politics differently — it’s only the comedy industry and social media who think I’m exotic.”

Not that all his detractors are on the left, it turns out. “I had my most concerted heckler of the last tour in Guildford,” he laughs. “People think lefties will give me stick but you try saying you’re not a Boris fan in Guildford ... carnage.”

Away from comedy, how does Tory boy Norcott like to relax? “I like cricket and house music. I know — I’m a bundle of contradictions.”

Q. When did you realise you had a talent for comedy?

A. I won a best cowboy competition when I was 8. But mainly because I said ‘Essex’ instead of ‘Texas’.

Q. Who were your inspirations?

A. My mum, Dave Allen, Eddie Murphy and Bill Burr.

Q. Why do you think a lot of comedians are ex-teachers?

A. It’s a similar process. Stand terrified in front of a group of people, try to make them trust you.

Q. Can you just sit down and write material, or do you need to wait for inspiration?

A. It’s more an idea that grows louder in my brain then I become obsessed with doing something on it. The idea always comes first, then the jokes are a deal you make with the audience so you can continue spouting off.

Q. There have been people who have poked fun at politics or authority since the days the medieval fools. Is there a period you think you would have loved to have worked?

A. I’d have really loved to be at the Establishment club with UK satire took off in the Sixties. Though it was mainly posh boys then, so I’m not sure I’d have made it on stage.

Q. TV funnyman Gyles Brandreth spent time as an MP. Is it something you would consider some time?

A. Absolutely not. An MP can work their balls off for years then lose their job at an election because of their colleagues’ incompetence. That deal doesn’t work for me. As things stand I get to wang on about politics. The public might reject me, but at least it will be my own fault.

Q. Would you ever consider doing any of the celebrity shows and if so which one?

A. Maybe one of the quiz ones. I think it’s a rite of passage for someone on Twitter to use your name with “celebrity” in inverted commas.

Q. What is the best piece of advice you’ve been given?

A. Be magnanimous in defeat and magnificent in victory. Or is it the other way round. Who cares? You lost, get over it.