Audience could feel the love 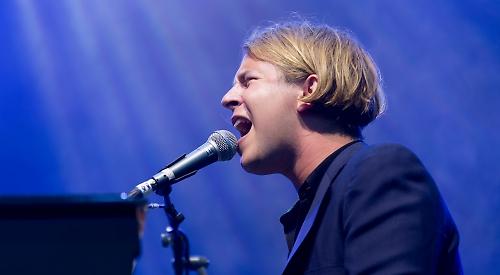 TOM Odell brought energy and passion to the Henley Festival’s Floating Stage. The Ivor Novello-winning singer-songwriter was always going to be popular. His debut Long Way Down in 2013 topped the charts in the UK and since then he has won multiple awards and sold 1.8 million albums.

His set included his 2013 single I Know as well as Sparrow, Still Getting Used to Being on My Own and Go Tell Her Now.

The piano-led tributes to love and heartbreak are raw and emotional and the singer is famed for his sense of atmosphere, which built throughout the night.

Each song had an anthemic quality and the lyrics coupled with the singer’s powerful style were evocative.

He arrived on stage with his band 20 minutes late but launched straight into I Know and Sparrow.

Odell then asked how the audience was doing before playing Still Getting Used to Being on My Own.

He said: “How are you doing Henley Festival? You feeling good tonight? I must say you are all looking very, very beautiful.”

Following this he introduced his guitarist, bassist and drummer and each played a solo, which received cheers from the audience.

He then performed Half as Good as You and Heal.

At times the singer stood on his piano to excite the audience.

People left their seats, too, and started dancing in the aisles when Odell sang Go Tell Her Now.

He joined the audience and took a woman back on stage with him during his 2013 song Hold Me.

The performance received a standing ovation and he hugged her at the end, having danced with her.

“I think I just met my future wife,” he said. “Ladies and gentlemen of Henley, I want to express how much I am enjoying myself on stage tonight. If you do one thing for me this evening, and just one thing when we come back in and I go ‘One, two, three, four’, I want you to dance like f***ing animals alright? Ladies and gentlemen of Henley, who’s with me? Dance like f***ing animals!”

People sang, danced and waved their arms when the band closed the night with a rendition of Billy Joel’s Piano Man. It was followed by another standing ovation and fireworks.

It’s safe to say his feelings were amply returned.