Tribute to Abba had us rocking 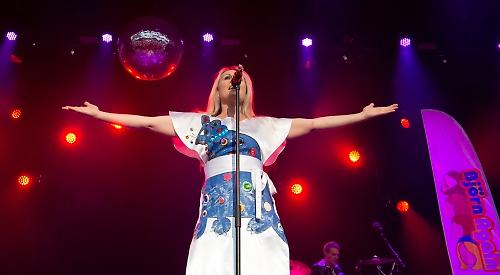 IF Björn Again can charm this sceptic, they can win anyone over.

We’ve been spoiled over the years with Henley Festival headliners like Elton John, Nile Rodgers, Grace Jones and Sting, so it’s perhaps understandable that I’d feared a tribute band would be a disappointment.

However, their Saturday night performance on the Floating Stage was better attended and more enjoyable than many I’ve seen before — and judging by the crowd’s reaction, I very much doubt that’s a minority opinion.

Perhaps most importantly, the group — who, we were reminded in a pre-show greeting recorded by DJ Tony Blackburn, have been touring since 1988 — blazed through their set with tongues planted firmly in cheek.

There’s something inherently ridiculous, or at least a tad cheesy, in the very notion of a tribute act — and Björn Again made this a central feature of the show instead of trying to play it down.

From their on-stage banter in mock-Swedish accents to their pseudonyms of Agnetha Falstart, Benny Anderwear, Frida Longstokin, and Björn Volvo-us, they were as much entertainers as musicians.

They packed the night with all kinds of twists, including a rap interlude from “Benny” during Take a Chance on Me which, while it probably wouldn’t have caused Dr Dre to break a sweat, was all the more entertaining for coming totally out of the blue.

The hip hop vibe continued during Money, Money, Money as “Agnetha” and “Frida” showered the audience with (presumably) fake banknotes, prompting a mad scramble in the front rows.

Of course, that’s not to say they were slouches on the musical front. They bashed out their takes on Abba’s hits with flawless precision and a beefed-up rock ’n’ roll vibe that really brought them to life.

Benny and “Björn” in particular brought far more energy to the proceedings than their namesakes, with the former banging his head and jumping at his keyboard like the forgotten love child of Little Richard and Angus Young.

Björn, who relished his chance to shine during a cover of Van Halen’s Jump, embellished many of the original numbers with guitar solos that drew loud cheers from the grandstands and the decks of passing boats.

Agnetha and Frida were, of course, the heart and main focus of the evening, perfectly apeing the stage presence and mannerisms of the original vocalists while encouraging the audience to sing and dance along at every opportunity.

In a nod to the tumultuous relationships between the members of the real Abba, they both flirted and bickered with their “husbands” while chatting between songs.

Despite the group’s less than serious facade, it’s no surprise that Björn Again have received the real Benny and Björn’s seal of approval.

They clearly respected their source material and brought it to life in a way that reminded everyone — even po-faced alternative rock fans like me — of Abba’s ability to write infectiously catchy and universally appealing pop.

The fact that the audience sang along to every single word — from Prime Minister Theresa May to a group of girls near me who couldn’t have been older than 12 — shows Björn Again were the perfect choice for the festival.