Disco moves add to the fun at festival launch 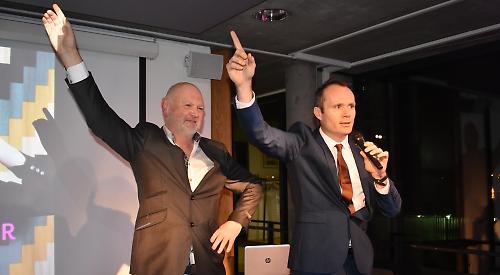 THE launch of the Henley Festival’s programme is always a light-hearted affair and this year’s was no exception.

Invited guests and the media gathered at the River & Rowing Museum on Monday evening to hear artistic director Stewart Collins reveal the names of the stars who will be performing in July.

“The person we do have is Stewart Collins, the Henley Festival’s artistic director.”

The audience laughed as the “real” one walked on the stage and sat down with Mr Whitmarsh. However, there was a decidedly understated reaction as Mr Collins announced the first two big names.

Lazy applause greeted the news that English ska band Madness would be returning for the first time since 2013.

Mr Collins took it in his stride and drew laughter when he said: “Just a single round of applause wasn’t quite what I was hoping for.”

Then the same thing happened with the next name.

“This man really, really is one of the great entertainers,” said Mr Collins. “I’m delighted to say for the very first time we will be welcoming James Blunt!”

The applause emanated from one man at the front of the audience.

“Can you all try to pick up on this level of enthusiasm?” said Mr Collins as he turned to the man and added: “And you can come again.”

The man responded: “I’ve been coming for 29 years.” Then everyone laughed.

Before Mr Collins revealed the identity of Disco Classical, the entertainment on the Saturday night, Mr Whitmarsh made the audience stand and wave their right arms in a disco motion. The two men demonstrated from the stage, which made everyone laugh once more.

Mr Collins said: “If you were with us last year on the Saturday night this will very much follow in that style because we have a night of full-on disco. You’re now officially trained disco dancers. We will be giving certificates for that.”

He said: “Ravel’s Bolero was made famous by Torvill and Dean and Stewart will recreate it with Myleene Klass.” Cue more laughter.

Mr Collins also revealed the names of the real comedians who will appear at the festival and recommended some in particular.

He said: “I think Lost Voice Guy will be good — what a great act to have at the festival. Pub landlord Al Murray is someone who’s really top drawer in the comedy world. He’s an absolute institution.”

He also suggested that the lesser-known Simon Evans might appeal to Henley people.

“He’s one of the few comedians to be on the right side of politics, not the left,” he said.

He said: “It is something I have done on a few occasions — to basically finish the festival with a big, big comedy act.”