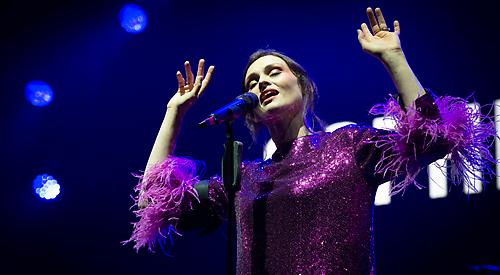 SOPHIE Ellis-Bextor had a packed crowd on their feet on the third night of this year's Henley Festival.

A mixture of her own hits and covers proved popular with the audience and this was followed by an Eighties DJ set by BBC radio presenter Sara Cox.

Ellis-Bextor waltzed onto the floating stage wearing a pink sequin dress to a huge cheer and opened her show with Take Me Home.

She also sang Wild Forever, Young Blood and 13 Little Dolls, Heartbreak, Crying at the Discotheque, Get Over You and Groovejet, which was released 21 years ago with Spiller.

She told the audience how nice it was to be back performing live, having kept her social media following entertained during lockdown with weekly 'kitchen discos' performances.

She said: "I'm not going to play it cool, I think you're absolutely fantastic. I missed you all so much and it's never as amazing in your mind as it is in real life.

"For the last 18 months, we started doing kitchen discos online. I understand it was completely barking."

Her covers included Madonna’s Like A Prayer and Lady by Modjo. She closed her set with Murder on the Dancefloor and accepted calls for an encore, covering Baccara’s Yes Sir I Can Boogie.

For full coverage of the festival, see next week's Henley Standard.