Good to be back... festival returns with feelgood vibe 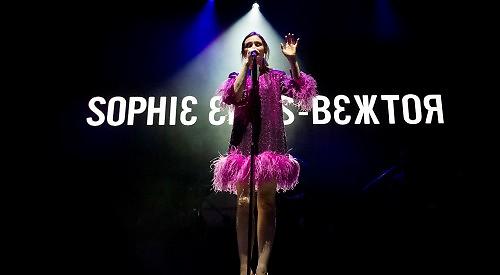 IT’S good to back — that was the verdict of Henley Festival organisers as the star-spangled show returned.

The line-up was almost identical to the one for last year’s festival until that was cancelled due to the coronavirus pandemic.

Despite it taking place two months later than normal for covid safety reasons, everyone — performers, audiences and organisers — agreed it had been worth the wait with some spectacular shows over five balmy September evenings.

Festival chief executive Jo Bausor said: “What an amazing five days. Everyone was so joyous and happy to be out and had made an effort to dress up. The support was second to none.

“We were also so lucky with the weather. It did get darker earlier but I think that contributed to the atmosphere as we were able to have more lighting and it gave the event a different feel.”

Up to 6,000 people attended each of the five nights, which featured not only the headliners on the “floating” stage but comedy shows, fairground rides, art displays, a range of restaurants and snack vans and champagne bars.

There was also the usual array of eccentric performers roaming around the site entertaining visitors, including men on stilts dressed as pink flowering plants, bodyguards, mermaids and airmen. Each night was rounded off in traditional style with a titanium fireworks display.

There were many famous names in the crowds, including former prime minister Theresa May with her husband Philip, entrepreneur Sir John Madejski, broadcaster Debbie McGee, who lives in Wargrave, and author Irvine Welsh, who now lives in Henley.

Opera singer Katherine Jenkins, who has appeared twice at the festival, wore a floor-length pink gown and comedian Michael McIntyre, 45, was there only weeks after he appeared at the Kenton Theatre with a warm-up show for his latest tour.

Most of the main acts made references to the pandemic during their performances and Blunt revealed he had covid-19 earlier this year.

Madness took the main stage on the opening night.

Former Spandau Ballet frontman Tony Hadley enjoyed the concert from the front row of the deckchairs on the lawn in front of the stage.

Frontman Graham “Suggs” McPherson told the crowd: “It’s so lovely to be here, to be doing something after one year and a half.”

The group, who last appeared at the black-tie event in 2013, played for two hours and had the whole crowd on their feet as they played hits including One Step Beyond, Embarrassment, Baggy Trousers, Driving in My Car, House of Fun and Our House. The crowd sang along as the band performed It Must Be Love before concluding the show with Madness.

On Thursday, it was the turn of James Blunt, 47, the former soldier turned singer-songwriter.

It was the first time the You’re Beautiful singer had performed his latest single, Love Under Pressure, to a live audience.

Speaking before the show, he told the Henley Standard: “I just rehearsed the single with my band for the second time and the third time ever will be with the people of Henley so it should be really fun.

“I’ve never played in Henley before but I have mates here. It’s a really beautiful part of the world and I love the English countryside. I was, of course, very aware of the very famous Henley Royal Regatta.”

Blunt recalled playing at the Royal Albert Hall in London in May when venues re-opened as the coronavirus restrictions were eased.

“To the nation’s horror I was the first full capacity show,” he said. “The audience was amazing and everyone was just so pleased to be out. We could have played anything and they would have cheered me on — it was great.

“I’d recently had covid. It got into my lungs and I struggled to breathe. I wasn’t allowed to speak for two weeks before the show so I stepped on stage not knowing what would happen.

“My tour starts in February and we will be playing places like Wembley Arena and then after that I will be flogging my new album. It feels like I’ve come back to school after a year-and-a-half off.”

Blunt opened the show with How It Feels to Be Alive and performed other hits such as Wisemen, Beautiful Dawn, 1973 and Bonfire Heart. He also sang Smoke Signals, The Greatest, I Told You and Carry You Home.

Speaking after singing Champions, Blunt told the audience: “This is the poshest thing I’ve ever played at. There was no need to get dressed up just for me.

“This is very exciting. My band are excited as this is the hottest audience they’ve ever played to. We’ve waited 17 years to be here and everything else has just been practice until we got to you guys.”

The audience sang along to Goodbye My Lover and were on their feet dancing for the last few songs, including his 2005 hit, You’re Beautiful.

At the end of the show, he brought his young goddaughter, Ivy, on stage to bow with the band.

Blunt returned to the stage after the spectators stamped their feet for an encore. He obliged with Love Under Pressure, 1973 and Bonfire Heart.

Comedian Al Murray and his alter-ego, the Pub Landlord, performed in the Salon Comedy Club tent.

The 53-year-old, who last performed at the festival in 2016, said he wished he had his own boat mooring.

Speaking before the show, he said: “It’s nice to be doing my job again. It’s funny as everyone is talking about how lockdown was and it’s the longest I’ve ever been at home so that was nice.

“But it did take some getting used to and it was odd not going on tour. I did lots of stuff to keep me occupied but I’m best at doing stand-up so it’s nice to be back doing it again.”

On Friday night, pop singer Sophie Ellis-Bextor waltzed on to the stage wearing a pink sequin dress to a huge cheer and later revealed that she had her outfit sent specially for the occasion.

She said: “This morning, I realised the outfit I brought with me wasn’t going to be up to scratch for you, Henley. I phoned my teenage son and described this dress.

“He took it to our neighbour and they brought it to Henley. What I’m trying to say is, I really really wanted our date to go well.

“Normally, I’d have some sparkly pants that would go underneath this but I couldn’t tell my teenage son where they were.”

Ellis-Bextor opened with Take Me Home and then told the audience how nice it was to be performing live again.

She said: “I’m not going to play it cool, I think you’re absolutely fantastic. I missed you all so much and it’s never as amazing in your mind as it is in real life.

“For the last 18 months, we started doing kitchen discos online. I understand it was completely barking. Now that we’re back on the road doing gigs, it’s so lovely to see everybody again.

“You really scrub up well. You look so beautiful tonight. I think I’m being out-twinkled by quite a few people.”

She performed some of her top hits including Crying at the Discotheque, Get Over You and Groovejet, which was released 21 years ago with Spiller.

She also sang Wild Forever, Young Blood, 13 Little Doll and Heartbreak. Her covers included Madonna’s Like A Prayer, Lady by Modjo and Over and Over by Hot Chip.

Ellis-Bextor praised the audience for their waltzing after performing Love Is A Camera, saying: “You didn’t know you were going to be doing that when you left the house; a bit of ballroom dancing to a song about a witch.”

She closed with Murder on the Dancefloor and then accepted calls for an encore, covering
Baccara’s Yes Sir, I Can Boogie.

She told the crowd: “Everybody says what a lovely festival this is. My goodness they are right. I hope that one day we can have another date because this has been gorgeous.”

On Saturday night it was the turn of Kathy Sledge, a founding member of Seventies American group Sister Sledge backed by the Disco Classical orchestra.

The crowd were up dancing from the very first song, with Disco Classical’s male vocalist singing Back to my Roots by Odyssey.

The band then began to play Sister Sledge’s We’re Lost in Music while six backing dancers in glittery jumpsuits danced.

Sledge herself then danced on to the stage wearing a glittery dress to match the dancers and began singing. The grandstand was shaking from the crowds dancing and jumping around as they enjoyed one dance hit after another.

Everyone clapped along to Everybody Dance and Good Time by Chic, then there was Don’t Stop Till You Get Enough by Michael Jackson and Got to be Real by Cheryl Lynn.

Sledge sang and danced for 45 minutes with a big smile before she handed over to the two younger female singers from Disco Classical.

The younger women had no problem keeping the crowd going, singing I’m Coming Out by Diana Ross and Relight My Fire by Take That and Lulu.

As the performance went on, many guests left their seats and danced in aisles and on the seats, drinking champagne and hugging and kissing. Later, Sledge returned to the stage to sing Sister Sledge’s He’s the Greatest Dancer.

She then performed two encores, first returning for Thinking of You by Sister Sledge and then the group’s We Are Family.

Sunday was family fun day at the festival. There was a performance on the riverside by the Open Air Drawing Room and the Henley Youth Choir performed on the grass.

A flamboyant woman in period dress entertained passers-by along with three gorillas.

In the Bedouin tent choreographers Ruth and Clare taught children yoga-style dance poses. In the evening, a quartet of rock vocalists from West End hit shows, along with the 52-piece English National Orchestra, played hits such as Bohemian Rhapsody, Staying Alive and Mamma Mia before the final fireworks display.

Other celebrities who attended the festival included Skins star Kaya Scodelario and her husband Benjamin Walker.

The 29-year-old actress is pregnant with her second child and cradled her bump under her tropical printed dress.

Mrs Bausor, who was overseeing her first festival as chief executive, said: “We’re incredibly grateful for the support from our sponsors, our patrons and the Friends of the Festival.

“But most of all we want to say a huge thank-you to our audience who have not only supported us through these extremely tough 18 months but who make the Henley Festival the unique, magical experience that it is each year.

“We’ve had so much positive feedback from the audience, the sponsors, the patrons, so many, but the one that really stood out for me was, ‘Team Henley Festival, you smashed it,’ and for me that was just brilliant.”

Next year’s festival — the 40th — is scheduled to take place from Wednesday to Sunday, July 6 to 10.