Buy a bloom basket and help our honey bees 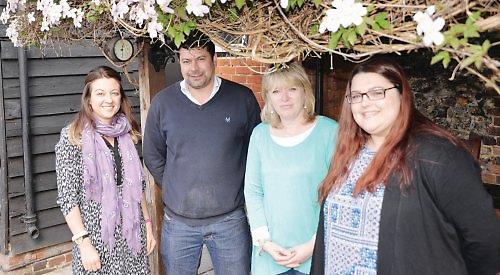 They will contain purple, blue, white and red flowers designed to contrast with the town’s brick and flint architecture.

All the plants will be nectar and pollen rich to provide a food source for bees and other pollinating insects.

The annual hanging baskets scheme is being co-ordinated by Henley in Bloom and supported by the Henley Standard and Brakspear.

She said: “I would encourage all businesses and residents to get involved, as they have done in previous years, especially people who live in the town centre or on the routes in as it works really well. It’s about making the town beautiful and enhancing its appearance while also helping bees. We want as many pollinator-friendly plants as possible.”

Councillor Hinton said the aim was to sell 216 hanging baskets in order to make a total of 1,000 sold in the five years since the launch of the Henley Standard’s Buy a Basket campaign in 2013.

She said: “It shows how well we have done in the last few years, selling nearly 800 with the help of the Henley Standard. It makes Henley look beautiful and to reach 1,000 baskets sold would be amazing.”

The cost of the hanging baskets, which will once again be supplied by WindowFlowers of Burnham, will be £60 each, including VAT, the same price as last year.

They will be delivered in late May and kept in place until the end of September and be watered throughout.

Miles Watson-Smyth, owner of WindowFlowers, said the plants would also help combat the town’s air pollution problem. He said: “I am thrilled to be supplying the baskets to Henley again this year and remain very grateful for the support from the Henley Standard.

“Last year saw an unprecedented number of baskets and I feel proud to contribute to this long tradition of floral decoration in the town.”

Brakspear recently launched a limited edition beer, Honey Bee, and 10p from every pint sold will go to Friends of the Earth’s Bee Cause campaign.

The company encourages its landlords in Henley to support the scheme and buy hanging baskets.

Emma Sweet, the firm’s marketing manager, said: “The baskets help people to see the pub and make it look inviting.

“Obviously it’s important for the frontage to look appealing, especially for tourists or people who are new to Henley.

“If the pub looks welcoming and friendly then people are more likely to stick their head through the door and come in for a drink and a bite to eat.”

Any business or group of residents which orders more than 10 baskets will be entitled to a discount.

Last year, Henley won its fifth consecutive gold in the Thames and Chilterns in Bloom competition when a record 241 hanging baskets, with red, white and blue flowers to mark the Queen’s 90th birthday, were sold.

Another 137 hanging baskets were bought by the town council.

In 2015, the town was honoured with its first ever Britain in Bloom gold award.

Cllr Hinton said letters would be sent to businesses, adding: “We want to thank them for their previous support and ask new businesses for their support as well.”

To order a basket, ask for a form at the town hall. Alternatively, call Becky Walker at Henley Town Council on (01491) 576982 or email b.walker@henleytowncouncil.gov.uk