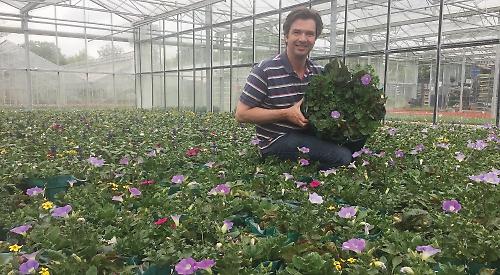 THEY may not look too spectacular now but these are the hanging baskets that will transform the look of Henley this summer.

A total of 131 baskets has already been sold as part of Henley in Bloom’s annual Buy a Basket campaign, which is supported by the Henley Standard.

Dozens more are expected to be snapped up by residents and businesses before the baskets start to be put up later this month by supplier WindowFlowers, of Burnham.

The baskets will contain purple, blue, white and red flowers that are pollen-rich to help provide a food source for bees and other pollinating insects.

New Henley Mayor Kellie Hinton, who chairs Henley in Bloom, will have a basket outside her home in Queen Street for the first time. Her father-in-law John Hinton and his sister Christine buy a basket each year in memory of their mother Emma Leontine and ask the town council to choose where it goes, so this year Councillor Hinton asked to have it and has paid for a bracket to hang it.

She said: “They have donated a basket to the campaign since it started and Queen Street has one of the highest number of orders for residential streets, so it will add to the display.”

“I think anybody who has a shop or office facing on to a main street should be doing it. The quality of baskets has improved since they moved to the current providers.”

Stockbrokers Redmayne-Bentley, based in Market Place, will have four hanging baskets.

Investment manager Bill Rooke said: “We love the colour and the way it looks against our building. You see the baskets around the town and they look, and are, well-maintained.”

The Spoon café in Duke Street, which opened in October, will have one hanging basket.

Cindy Gillett, who owns the business, said: “It adds vibrancy and colour to the frontage, which is never a bad thing, especially when you’re in a corner like we are.

“We have just been given planning permission for tables and chairs outside the café so hopefully it will help transform that area for our customers.

“I think it’s lovely when businesses make an effort. With all the bunting now up for the regatta it adds to the excitement and makes the town a lovely place to be.”

Stonemasons E T Sheppard in Reading Road will also have one hanging basket.

Carol Jones, who is part of the administrative team, said: “We support the scheme because we like Henley looking good and it’s nice to have flowers everywhere. WindowFlowers looks after the baskets very well by keeping them watered.”

“The baskets make sure the town looks good for residents and visitors.”

Handelsbanken, in Tuns Lane, will also have two hanging baskets.

Branch manager Sarah Dean said: “We like to support this local initiative which brings the town together around a common theme.

“It adds colour to the town and connects us with other businesses as we are out on a limb near a car park.”

Cllr Hinton said: “People seem to be really pleased with the idea of supporting bees and they want to make the town as beautiful and as bee-friendly as possible.

“Miles Watson-Smyth at WindowFlowers always does a great mix of flowers.

“We want people to share their pictures of bees and other pollinators using the plants on social media as it helps the cause.”

She added: “There is still time to make an order as we have extended the deadline.”

Orders for the baskets are open until next Friday but people are encouraged to order as soon as possible.

They will be delivered this month and will stay up until September and will be watered throughout.

Each basket costs £60, the same price as last year. Any business or group of residents ordering more than 10 baskets will be entitled to a discount. A bracket to hang a basket costs £26.40.

To order a basket, complete and send off the form printed here, Alternatively, call Becky Walker at Henley Town Council on (01491) 576982 or email her at b.walker@henleytowncouncil.gov.uk