Beds planted with marigolds in celebration of honey bees 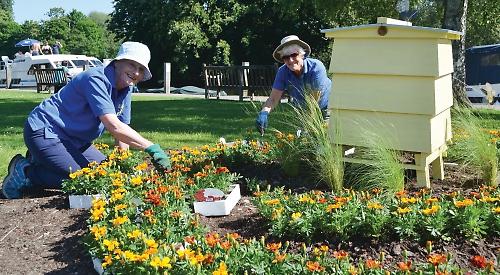 TWO-THOUSAND marigolds have been planted in the celebration flower beds in Mill Meadows in Henley.

The planting was carried out by Henley in Bloom’s gardening buddies and the flowers are in the shape of a spiral with two beehives as the centrepieces. This is to reflect the campaign’s theme for this year of pollen-rich plants that help to provide a food source for bees and other pollinating insects.

Elizabeth Hodgkin, who organises the community gardening group, said: “It all started with Joan Edwards, one of our buddies, saying her brother kept bees. He did not have any spare hives so we bought these ones. Joan also made the busy bees which are attached to the hives, which I love.

“The idea of the planting pattern was the bees go round the spiral until they reach the centre.”

Mrs Hodgkin said: “I’m delighted with the beds. Someone who came past when we were working on them said they were the best ones yet.”