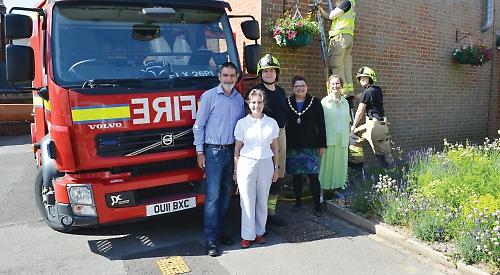 FOUR more hanging baskets have been bought from Henley in Bloom in the last week, bringing the total to 237.

More than 100 residents, shops, businesses and community groups have once again got behind the Buy a Basket campaign, supported by the Henley Standard.

The baskets, which are supplied by WindowFlowers, of Burnham, are rich in nectar and pollen to provide a food source for bees and other pollinating insects.

Each one contains purple, blue, white and red flowering plants, which will continue to grow over the summer.

Henley in Bloom is being judged for the regional Thames and Chilterns in Bloom competition on July 20.

Last year the town won its fifth consecutive gold award but lost the title of best town in the region to Amersham.

Mayor Kellie Hinton, chairwoman of the bloom group, said she thought the baskets would look their best in time for judging day.

She said: “The baskets have only been in for a short time but they are already blooming and I have no doubt they will be really visible by July 20.

“The article last week encouraged a lady to phone up and donate another basket and I think that’s really lovely. It shows the community spirit and how the town is working together to make the town as beautiful as possible.

“The baskets help make the town appealing to people who are driving through. They notice how beautiful the flowers look and think ‘next time I’m coming this way I’ll stop in Henley’.

“The visual presentation of the town does help draw people in. We are the best in the area for what we do and how we present ourselves. I hope we are as inviting as we can be.”

The Regal Picturehouse, in Boroma Way, will have two hanging baskets, which will be put up once it has scaffolding taken down from the outside of the building at the end of the month.

Melissa MacFarlane, general manager of the cinema, said: “We have supported the hanging baskets scheme, as well as the Christmas tree scheme, for quite a few years.

“The outside of the cinema faces out on to a big wall, from the side of Waitrose, and it helps to make our frontage look more inviting and it runs on from the beautiful-looking baskets on Bell Street.”

Delegate House in Hart Street will have one hanging basket.

Alex Nearchou, conference organiser, said: “The baskets look beautiful and we like to support Henley in Bloom.”

Sandie Russell and her daughter-in-law Lise Harrow have bought two hanging baskets for Stocks, the gift, homewares and clothing store in Bell Street.

Mrs Russell said she felt it was important independent shops did what they could to support the town.

She said: “I think it’s just a lovely thing to do. It’s something for everybody in the town, not just the shops.

“It looks lovely for pedestrians and for the town as a whole. I feel very strongly as independent businesses we should be doing everything we can to support the town. That’s why the hanging baskets are a good thing to do.”

Jonkers Rare Books, in Hart Street, has bought one hanging basket. Sam Jonkers, who runs the shop with her husband Christiaan, said: “It’s a nice initiative to follow and it makes the town look lovely and welcoming.”

The baskets contain purple surfinia, white surfinia, red fuchsia marinka, golden bidens aurea, blue scaevola and blue salvia victoria. They will stay up until September and will be watered throughout by WindowFlowers.

This year marks the fifth year since the start of the Buy a Basket campaign and more than 1,000 baskets have sold.

Last year, a record 241 hanging baskets, with red, white and blue flowers to mark the Queen’s 90th birthday, were sold.

Meanwhile, the Gardens of Henley competition awards night will take place at 7pm, on September 21 at the town hall.

The annual event is run in partnership between Henley Allotments Association and Henley in Bloom.

There will be awards handed out for best front and back gardens, best pub or restaurant garden and best community garden.

l Henley in Bloom will hold a Thames and Chilterns in Bloom seminar on Thursday, November 2 at the town hall. A similar event took place last year, attended by more than 40 people, where there were presentations about how to improve their scores in the annual Royal Horticultural Society competition.