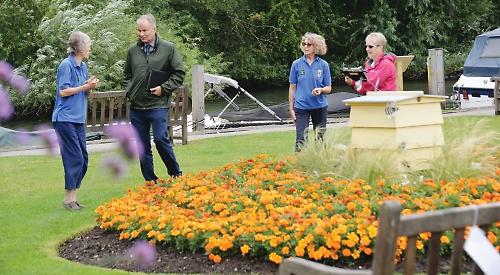 THE enthusiasm of Henley in Bloom’s volunteers was noted by judges who toured the town.

Julie Graham and Peter Goff were given a two-hour tour of the town by Henley Mayor Kellie Hinton and the town council’s park services manager Gareth Bartle.

Henley is bidding for a sixth consecutive gold award in the Thames and Chilterns regional competition and to win back the best town title, which it lost to Amersham last year.

The tour took place on Thursday last week in rainy and overcast conditions but the park services staff had been working since 7am to make sure the town looked as good as possible.

It included a meeting with members of the Gardening Buddies group in Mill Meadows, where the celebration flower beds have been planted with marigolds in a spiral with a beehive in the centre to reflect this year’s theme of pollinators.

The judges also visited Badgemore Primary School in Hop Gardens, where there is a new pond, beehive and orchard.

Mrs Graham, from Bray, said: “What stands out is the enthusiasm of all these people who participate in Henley in Bloom.

“The Gardening Buddies work really hard on behalf of the community. When there are new projects or new developments, the bloom group is involved.

“The bloom initiative is well established in Henley and everybody wants to be a part of it.”

Mr Goff, from Milton Keynes, said: “I was very impressed with the work at Badgemore School. There is a real keenness and drive to take the school forward with the work in the grounds.”

The tour began at the Regal Picturehouse, in Boroma Way, where Councillor Hinton, chairwoman of Henley in Bloom, gave a presentation on the group’s work this year using a cinema screen.

Cllr Hinton said: “I want to thank the contribution of the town council and its park services team, all the volunteers and the Henley Standard for its basket campaign, whose support is second to none.”

The judges were then driven by senior parks warden Karl Bishop along Bell Street, New Street and Thames Side before crossing the bridge to Greencroft allotments.

Then they were taken to Singers Park, off Thames Side, for a short boat ride to view the Henley Royal Regatta course, Henley Bridge, Red Lion Lawn and River Terrace.

They disembarked at Marsh Meadows to view the wildlife areas and spoke with Helen Cook, head of learning at the River & Rowing Museum, which uses the meadows for conservation work and workshops with children.

Mrs Cook said: “We use the area as a third classroom. We run things such as pond dipping, where children get some samples and investigate the organisms they find.”

The judges then moved on to Mill Meadows where they were shown the green wall on Leichlingen Pavilion, the celebration beds, the Rotary garden and the sensory garden.

The Gardening Buddies had been out since 8am tidying up and removing dead flower heads.

Elizabeth Hodgkin, who organises the group, said: “We have had comments from people saying they love the new beds.

“The parks team has done a great job and the whole town looks fantastic. It was ready to be judged.”

They then visited Fair Mile Vineyard, where owner Jan Mirkowski spoke about his work with local schools and helping the environment.

To finish the tour, the judges visited the primary school, where they were met by parent governor Tuc Ahmad. A tour of the grounds was led by year six pupils Matias Regueiro, Archie Fulbrook, Amelia Jacob and Ciara Boyle, all 11. They spoke about the school’s beehive project, gardening club and vegetable growing as well as progress of the school’s fruit orchard.

Mr Ahmad, who has two children at the school, said: “We wanted the kids to speak for themselves. They were the best ones to demonstrate how the changes to the school grounds are providing value in their lessons and recreation time as well as improving biodiversity.”

After the school visit, the judges were served lunch at the Station House pub in Market Place, where they were joined by about 20 Henley in Bloom volunteers.

Cllr Hinton said the tour had gone well despite the drab weather.

“The Badgemore children did a wonderful job, showing the knowledge they have gained and how they have been doing it themselves,” she said. “Henley in Bloom is a sub-committee of the town council but really it’s a collective of different people from different backgrounds that help make Henley look stunning.”

The competition results will be announced on September 28.