Town's year off from bloom contest but you won't notice 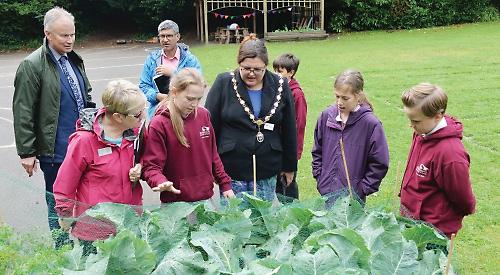 HENLEY is set to take a year off from entering the Britain in Bloom competition.

It would be the first time the town has not taken part for more than a decade and would mean breaking Henley in Bloom’s run of six consecutive gold awards in the town category in the Thames and Chilterns regional competition.

The Henley in Bloom committee will make a decision at its next meeting but chairwoman Kellie Hinton, park services manager Gareth Bartle and administrator Becky Walker are all in favour of taking a year off.

Councillor Hinton, who is Mayor of Henley, said the group would continue with its usual initiatives and events, including the Buy a Basket campaign in conjunction with the Henley Standard, schools projects and awards.

She said: “Having chaired Henley in Bloom for five years, I have worked very closely with Becky and Gareth on it. As we say every year, we do what we do for Henley and while the competitions provide us with a focus, this does not mean we are going to stop.

“The town will still look wonderful and we will still have floral displays celebrating health, heritage and wellbeing.”

Cllr Hinton said she spent up to 100 hours a year preparing Henley’s bloom entry presentation and portfolio for the judges.

She wants to spend this time on launching new initiatives and to organise more It’s Your Neighbourhood entries from around the town.

This is a competition for community groups that “clean up and green up” their areas.

That stemmed from a couple of residents getting together and wanting Henley in Bloom’s help to fund a flowerbed.

“That kind of work is spreading and we have been making a push with the Friends of Freemans Meadow. We are trying to encourage friends groups or residents’ associations to form.

“There are many other areas where residents do really good community work that should be recognised.

“We want to help those kind of organisations enter It’s Your Neighbourhood and work with those communities that are sweeping their streets and going out of their way to improve their areas rather than waiting for the council to do something.

“We also want to work on the gardens of Henley and pubs and restaurants in bloom competitions. We want Henley in Bloom to be sustainable and to continue to be successful.”

In 2013 and 2014, Henley was awarded silver gilt in the national competition and in 2015 went one better by wining its first ever gold award as well as silver in the Entente Florale Europe competition.

Cllr Hinton said: “We have been more successful in the competition then we ever could have hoped and we plan to maintain our high standards whether we enter the competitions or not.

“Sometimes you need to pause, stop and evaluate what you’re doing to make sure you’re keeping to high standards.”

• The annual gardens of Henley awards took place at Henley town hall on Wednesday. The event, run in conjunction with Henley Allotments Association, celebrates the best front, back, pub and restaurant gardens across the town. A full report and pictures from the event will be published in next week’s Henley Standard.