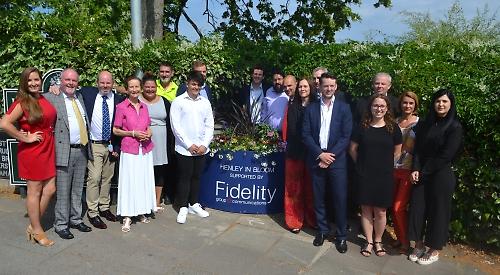 Sara Abey and Lorraine Hillier criticised the design of the planter, which is on the Berkshire side of the bridge near Leander Club.

The planter, which was officially unveiled last month, is blue with white text and includes the name of the Fidelity Group, which sponsors it.

Speaking at a Henley in Bloom meeting committe, Councillor Abey said there should be a process for how such partnerships work. “The sponsor’s name is in huge letters and it looks like the planter belongs to a commercial company,” she said. “I think it’s appalling.

“We are thankful for the sponsorship but this is about the design. It’s a commercial initiative using it as a billboard.”

Councillor Hillier said: “It could be a little bit more discreet. If I was sponsoring something I would be happy to go with what the council thought was appropriate.

“It’s not about the name, it’s about making a contribution to the community.”

Catherine Notaras, a member of the committee, agreed, saying: “It’s intrusive to a sensitive area.”

Councillor Kellie Hinton, vice-chairwoman of Henley in Bloom, said there was a larger “Henley-on-Thames” sign next to the planter.

“When you are trying to view that side of the road it’s not that big,” she said.

Committee member Caroline Langler, who spent four years finding a sponsor for the planter, said: “Fidelity have sponsored it for three years and after that we may be able to demand more money.”

Many planters and flowerbeds around the town are sponsored in order to keep down the council’s costs.

Senior park warden Kyle Dowling said: “We need to be careful with how we restrict advertisements.

“It helps with the council’s budget and if people are willing to put in money, then we need to be careful not to deter them. The money helps.”