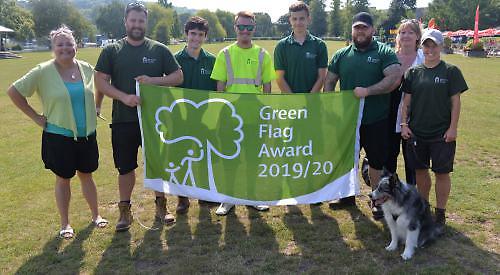 It was carried out by Keep Britain Tidy, which runs the scheme.

The award recognises the meadows for their facilities, which are maintained to a high standard by the town council’s parks services team.

They include the bandstand, bowling green, toddler playground, living wall and celebration beds.

Parks manager Karl Bishop said: “We are very pleased. It’s recognition of the high standards that we look to uphold. It’s a great feeling that all the team’s hard work is recognised.

“It’s the national benchmark and the equivalent to blue flag beaches.”

Kellie Hinton, vice-chairwoman of Henley in Bloom, said: “Henley town councillors appreciate what the parks service and all our partners in Henley in Bloom do throughout the year.”

Assistant parks manager Kyle Dowling said: “I’m over the moon. To win the Green Flag is amazing. It’s really good to get appreciated for the work we do all year round. It’s all about the effort the team puts in.”

The town council has been given a flag which will be displayed near Leichlingen Pavilion in Mill Meadows.

More than 1,900 parks and green spaces in the UK have received a Green Flag this year.