Gold again but not best town 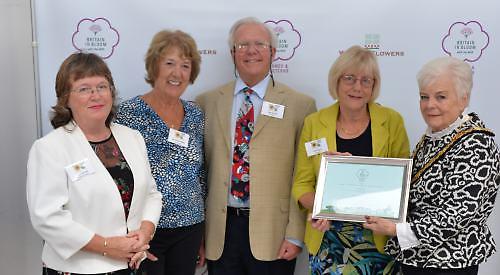 HENLEY won gold at the Thames and Chilterns in Bloom awards but failed to take the title of best town.

It was the seventh time in eight years that the town has won gold in the regional competition after taking a year off from entering last year.

The best town title went to Amersham for the fourth years running.

The awards were presented at a ceremony at the Oakwood Centre in Woodley on Tuesday.

In the It’s Your Neighbourhood category, Gainsborough Residents’ Association was rated “outstanding”, the Friends of Freemans Meadow was rated “advancing” and the Northfield End and Bell Street Residents’ Group “thriving”.

The judges were impressed with the level of community participation, environmental responsibility and gardening achievement. They praised the community orchard in Paradise Road for educating young people, the orchard at Freemans Meadow and the installation of water butts nearby.

They also highlighted the insect friendly planting and the mature photinia tree planted to screen the back of the road sign at Northfield End green.

Badgemore Primary School in Hop Gardens was highly commended in the Mark Mattock Schools Challenge Cup for its forest school and work to promote the environment.

Victoria Newton, vice-chairwoman of Thames and Chilterns in Bloom, said: “Congratulations to Henley coming back into the competition with such a high level of entries across the board. They’ve been phenomenal.”

David Eggleton, who chairs Henley in Bloom, said: “It’s amazing to win these awards in so many different categories.

“It’s also great to come to the awards because you see what else you might do to improve.” Kellie Hinton, vice-chairman of Henley in Bloom, said this was a good result for Henley following the death of the council’s parks manager Gareth Bartle in May last year.

She said: “It was really nice to be recognised again. It has given us a boost after the loss of Gareth.

“He would be very proud. Bloom was something very special to him but now it’s time to start looking at the future.

“The parks team always make Henley look nice whether we are in the competition or not. They have brought the standard up to such a high level.”

Parks manager Karl Bishop said: “It’s an amazing feeling to win gold. It’s an achievement after that year out. To have the extra awards is the cherry on the cake.”

As well as winning the small town category, Goring won an award for community involvement for its work to reduce single-use plastic by using it to make recycled sunflowers that were displayed in the town.

The judges were also impressed that villagers made their own hanging baskets. Goring Primary School was also highly commended in the schools challenge cup.

Stephanie Bridle, who chairs Goring in Bloom, said: “It’s a nice haul and we came away very pleased.  It has been a hard summer getting the village looking good so it was nice to come back and tell the village that all their efforts have been worthwhile.”

Watlington was awarded silver in the large village category and also won the conservation and wildlife award.

In the It’s Your Neighbourhood category, the village’s Mansle Gardens were rated “advancing”.

Terry Jackson, who chairs Watlington in Bloom, said: “We’re really happy, especially with the conservation and wildlife award as that is the main focus,”

Her husband Keith, the group’s treasurer, said: “It’s a great recognition of not just the work we put in but the care we have for the town to look good.”