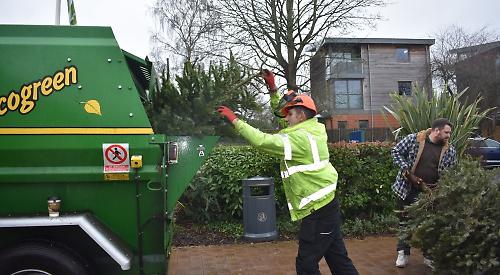 A CHRISTMAS tree shredding service raised £735 for Henley in Bloom.

Residents dropped off their trees at Mill Meadows on Saturday for shredding by Henley Town Council’s head of parks services Karl Bishop and councillors David Eggleton and Kellie Hinton.

The trio used a mechanical chipper to shred the trees and residents paid £2 each to use the service. Councillor Eggleton had spent the week
collecting trees from people’s homes at the cost of £5 each and raised £550.

Cllr Eggleton, who chairs Henley in Bloom, said he had received some nice comments.

He added: “It has been really good and hopefully it will happen again next year but we might tweak it a bit as some of the trees were massive.  We might charge £5 for collection but £10 if the tree is over 6ft as the larger trees were taking up more room in the van.

“I’d like to thank everybody for using the service as the money raised goes back into Henley in Bloom and then it goes towards funding projects in Henley at schools and other places.”