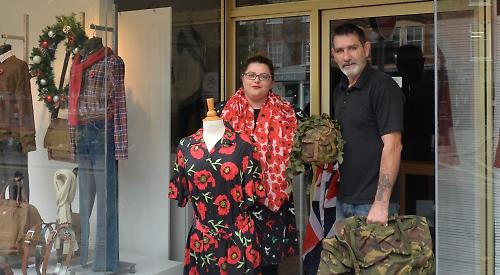 A REMEMBRANCE display has been created in the window of a Henley shop.

Henley in Bloom has dressed two mannequins, one in a poppy dress and the other in a naval officer’s uniform, at Facy in Market Place.

The figures will be surrounded by poppies made by schoolchildren.

Town councillors Kellie Hinton and David Eggleton, chairwoman and vice-chairman of the bloom group, decorated the window on Wednesday.

They were inspired after seeing a similar window display at a shop in Kent on the internet and approached Facy, which agreed the window could be used until after the town’s Remembrance service on Sunday, November 13.

The dress has been donated by Henley Poppy Appeal organiser Shirley Lees.

Every primary school in Henley has been invited to make poppies or a commemorative wreath to help decorate the display.

Councillor Eggleton said: “It’s very kind of the shop to give up the window space, especially in the run-up to Christmas.”