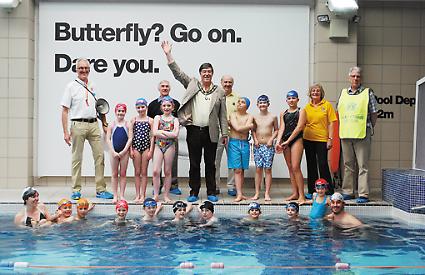 They swam more than 2,000 lengths of the 20m pool at LA Fitness in Newtown Road on Saturday.

Click here to view our picture gallery of some of those who took part in the event.

The 21 teams included pupils from St Marys School and Nettlebed, Trinity and Valley Road primaries as well as teams from Mencap and Shiplake scouts and guides.

A team of teachers from Trinity clocked up more than 100 lengths.

Liz Brent, who organised the event with fellow Lions member Chris Adam, said: It was great fun with lots of laughter and everyone enjoying themselves and encouraging each other. Weve been doing it for many years now and most of the schools take part. We had 136 kids this year, which is about the same as last year, so its still a very popular event.

She thanked LA Fitness which provided free use of the pool.

Henley Mayor Stefan Gawrysiak, who opened the event, said: The Lions do a fantastic job raising money for great causes and are a seriously nice bunch of people.

The money will be split between the individual teams charities and the Lions, who will give their share to cancer charity Hope for Tomorrow.