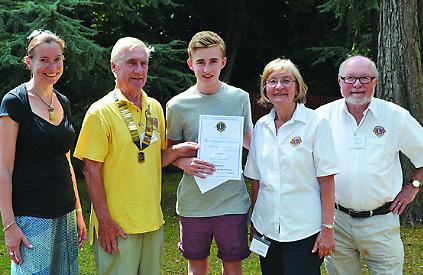 THREE pupils from a Henley school have won awards for achievements in music and cooking.

Jude Mowbey, India Burgess and Natalie Feek, from Gillotts School in Gillotts Lane, have been honoured with awards from the Henley Lions Club.

Jude, 16, from Middle Assendon, won the Margaret Claridge cookery award for the second year running. He said: “I won last year as well so it’s great to get it again. I’m passionate about cooking. I studied food technology at Gillotts and I have done work experience at several restaurants in Henley.”

Jude was presented with his certificate and cash prize at the school’s end-of-term assembly last week. India and Natalie, both 16, were unable to attend the presentation. They each won Ron Gilbert awards for music, India for exceptional performance and Natalie for exceptional composition.

Catharine Darnton, headteacher, said: “We are really grateful to the Henley Lions for their ongoing support. The young people really appreciate these awards which are real feats in food and music and it’s a very special award for them to achieve.”