From the Henley Literary Festival.. 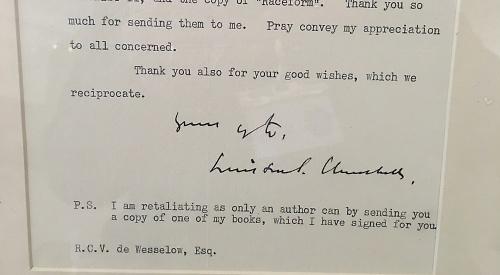 WHEN Tony Laithwaite appeared at the town hall to talk about his book on his life in wine, a female questioner began by saying that she ran a business with her husband and told of her exasperation at his inability to keep receipts in order.

Sitting two rows in front of her was Barbara Laithwaite who, as her husband’s book relates, suffered exactly the same problem!

IN the audience for the Churchill double bill of David Lough on his letters to his mother and Brough Scott on his horses was Lene de Wesselow, widow of racing publisher and enthusiast Ian.

A Henley resident, she arrived to show Scott a framed letter from Sir Winston to her late husband’s father, Roger, the founder of Raceform, thanking him for sending a copy and a model of Churchill’s horse Colonist II.

ACTOR Simon Williams, a loyal festival supporter both as actor and audience member, took on a new role when he interviewed Henley resident Mary Berry, proving how lucky the town is to have such celebrated residents.