May laughs off memoirs idea 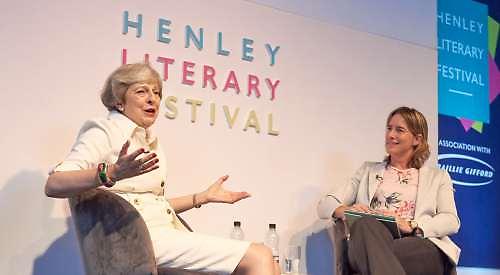 THERESA MAY says she is not interested in writing about her time as Prime Minister.

The Maidenhead MP was speaking at the Henley Literary Festival on Monday but avoided talking about her successor Boris Johnson, Brexit, or why she wasn’t at the Conservative Party conference.

Her talk at Christ Church in Reading Road had sold out within 24 hours of going on sale so the festival organisers had arranged for a live broadcast in another room.

Before her arrival, there were queues of people waiting to get in as well as two people with placards who were protesting on behalf of the People’s Vote campaign.

Mrs May, who arrived by car, was wearing a cream shirt dress and leopard print shoes as she took to the stage with her interviewer, Katherine Grainger, the Olympic rowing champion.

She said she had no regrets about her time at No 10 and she felt “honoured” to continue representing her constituency.

Asked about the prospect of writing a book of her own, she said: “It is not something I have thought about.

“I didn’t step down and think, ‘I have got to write a book’. It is not something I feel naturally I want to do. It has been suggested to me that people involved in significant events should write about them so that historians in the future can look back and see what those at the centre of events were thinking. It is not something I am rushing to do.”

She added: “There was not really time to keep a diary.”

When asked if she would consider writing a book on a subject other than politics, she joked about a crime thriller about a rowing detective set by the Thames.

Mrs May, who stood down as Prime Minister in May, had been asked to speak about the books that have influenced her life and revealed that she used reading as a form of escape from politics.

“I genuinely don’t read political books,” she said. “A lot of people involved in politics, whenever an autobiography or book of memoirs comes out, avidly devour it.

“I prefer to be informed with the day-to-day interactions with people rather than reading how someone did it 20 years ago. I would rather sit down with a good thriller or detective book than read a political memoir.

“When I was Prime Minister, reading for pleasure to a greater extent was confined to holiday reads. During the week I was reading but it was normally notes from civil servants on policy issues.

“It is great to have more time to do the things I wanted to do.”

Mrs May said she would read as much as possible when she was a child and was encouraged by her parents. Her father was a vicar and she said the church was a major influence in her early years. She said her favourite books included The Secret Seven by Enid Blyton, The Wool-Pack by Cynthia Harnett, Silent Spring by Rachel Carson and Jane Austen’s Pride and Prejudice.

She particularly liked Elizabeth Bennet in Pride and Prejudice as she was “witty, feisty and independent”.

Mrs May also revealed that she has more than 150 cookery books at home.

There was no time for questions at the end and the former PM slipped out via the back entrance.

Mrs May’s appearance fee and a donation from the festival will go to her charity, the MS Society.

Outside, protestors Tim Brassey and Judith Phelan, both from Henley, carried placards. One depicted a mock-up picture of Mrs May running through a field of wheat — a reference to a previous confession — with the slogan “cereal lier” and the other showing Mr Johnson with the words “serial liar”.

Mr Brassey said: “We’re calling for a second referendum on all the feasible choices on Brexit. Anything that’s realistically deliverable should be on the table because, as it stands, the people have voted for something that wasn’t clearly defined.”

People stopped to photograph the pair and some passing motorists honked their horns or gave the thumbs-up from their windows.

But others criticised them. One man, who was attending the talk, told them angrily to put the signs down and go home, adding: “You are causing division.”

Other politicians appearing at the festival included former Labour Home Secretary Jack Straw who told an audience at Phyllis Court Club that Labour leader Jeremy Corbyn would not make a good prime minister.

SAS veteran Chris Ryan spoke about his struggles with post-traumatic stress disorder at the town hall. He claimed he had been pressured into hiding the symptoms by a superior officer and suggested the culture of the military was not supportive of mental health.

Mr Ryan was talking about his new career as a fiction writer and he said the stress he suffered resulted in the breakdown of his marriage.

Celebrity cook Mary Berry, who lives in Henley, was in conversation with local actor Simon Williams on Saturday evening.

The 84-year-old said she had no intention of retiring or slowing down and that she and her husband, Paul Hunnings, had downsized to be nearer to their grandchildren.

She was promoting her cookery book Berry’s Quick Cooking and visitors received a copy with their ticket.

Sir Tim Rice, who lives near Hambleden, was in conversation with James Runcie at Phyllis Court Club on Monday. He discussed life experiences and his love of books as the president of the London Library.

Binfield Heath author Amanda Jennings took part in this year’s book club alongside Mike Gayle and Erin Kelly and discussed her most recent book, The Cliff House, which was published last year.

The festival runs until Sunday.