Recipes that hold your hand 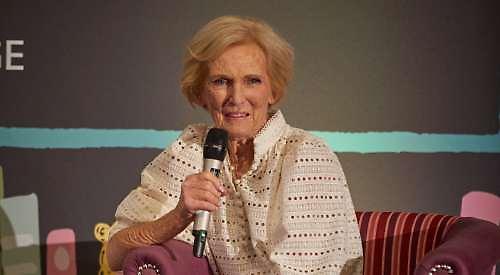 ARGUABLY one of the star guests of the festival this year, Mary Berry did not disappoint her capacity audience at Phyllis Court.

Her conversation with the charming, urbane actor and fellow local resident, Simon Williams, held the audience’s attention throughout. Their exchanges of amusing personal anecdotes and his natural interview technique allowed her to shine.

Mary was her usual charming self: professional but also down to earth and engaging. She reminisced about the wartime years in Bath — her school being bombed, sleeping in an Anderson shelter, cooking over an open fire and wartime food like junket.

She recalled not greatly enjoying school but loving reading, particularly Enid Blyton. However, in cookery class she did shine and once made a treacle sponge that her father declared was better than her mother’s.

When it came to a career choice she was advised to study domestic science — and the rest, as they say, is history. The publication of her first book paid just enough to buy a TV set but she has since become a prolific and highly respected author.

She believes in using simple language and writing as if holding the reader’s hand and guiding them through a recipe.

Her latest book Quick Cooking is, she said, simplicity itself. In her typical, easy to follow style, the recipes are straightforward with no long lists of ingredients.

Her maxim is “Don’t try to be clever and keep it simple” — a good rule of thumb for all home cooks.

Currently she’s working on a forthcoming TV programme with Monty Don — with whom, incidentally, she shares a dislike of kale — and a TV series called Best Home Cook due to air in January.

At one point Mary was asked what she would like her legacy to be. She hopes to have inspired her readers and viewers to enjoy simple cooking and to know the pleasure of bringing people together to share food.

Her advice to families is to try to get together over a shared meal like Sunday lunch whenever possible and enjoy quality family time. She also believes that everyone should be able to cook at least five basic dishes they can rely on.

When asked if she regretted leaving The Great British Bake Off after seven years, she replied that she had felt ready to move on but that the format was good and she fully endorsed Prue Leith as her successor.