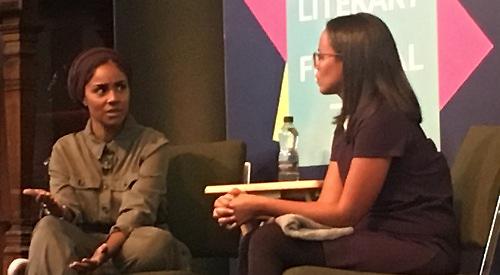 TV baker Nadiya Hussain has talked about her unhappy childhood while promoting her new autobiography.

The chef and author was in conversation with presenter Leah Boleto at Christ Church in Henley in a post-Henley Literary Festival event.

Hussain won the sixth series of The Great British Bake Off in 2015 and has gone on to host her own cooking and travel programmes on the BBC.

In Finding My Voice, she reveals how her abusive childhood and being a Muslim and mother-of-three have shaped her life.

Hussain, 34, was bullied as a schoolgirl and sexually assaulted in Bangladesh when she was just five. She was diagnosed with post-traumatic stress disorder and suffered from panic attacks and has also recently revealed that she nearly took her own life when she was 10.

She says her upbringing made her hate being a woman, as her father wanted a boy, and she now uses different colours of headscarves to let her husband, Abdul, know how she is feeling on any given day.

Festival director Harriet Reed-Ryan said: “It was brilliant having Nadiya to end the festival. She was an excellent speaker and the venue was packed.

“She spoke so beautifully about so many things, including motherhood, her work and her life. It was really moving and I think everyone felt it.”