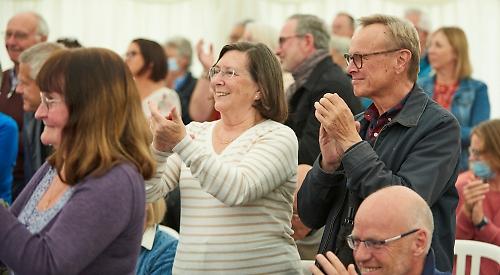 THE women behind the AstraZeneca vaccine were given a standing ovation at the Henley Literary Festival.

Professor Dame Sarah Gilbert and Dr Catherine Green, the scientists whose work at an academic lab in Oxford led to the development of the covid-19 jab, gave a talk to a packed audience at Phyllis Court Club on Tuesday, the fourth day of the festival.

They were introduced by festival director Harriet Reed-Ryan who said: “Without these two, we wouldn’t have a festival.” The women held their audience spellbound as they talked about their ground-breaking work.

Dr Green said: “We can make new medicines in Oxford. We knew what we were doing and we could drop everything else and get started.”

“We took calculated risks because we knew what we were doing.”

At that stage they still had no funding but the speed of their accomplishment was astonishing.

Dr Green said: “AstraZeneca came in and I think they thought we were amateurs but it was a hugely good collaboration.

“We were still making it as the volunteers were coming in the door.

Professor Gilbert added: “I said I wanted to create a vaccine for the world.”

At the end of the women’s talk, members of the audience — some wearing face masks — rose to their feet in applause. The festival — now in its 15th year — returned after being held virtually last year due to the pandemic.

Scores of well-known names have been appearing at venues across the town, including the town hall, the River & Rowing museum and Christ Church in Reading Road and a marquee at Phyllis Court Club.

Mrs Reed-Ryan said: “Ticket sales have been going really well and are proportionally higher than they were at this point in our record-breaking last physical festival in 2019.

“With more than 40 fewer events than usual and reduced capacity to reassure audiences, we have been blown away by the response.

“Some events have been sell-outs — not as many as usual but we have had some bigger venues.”

Tickets for Joanna Lumley’s talk on October 28 have also sold out.

More than 26,000 school children and 1,650 adults have joined literary festival events online so far. Mrs Reed-Ryan said: “When we started our planning earlier in the year we had no idea what restrictions might be in place and what numbers might be allowed.

“The support we have had from everyone has been fantastic — the people of Henley, the authors, the publishers and not least our sponsors. I think we’re having an impact in the town.

“I was in Coppa Club having a quick meal with my family when I heard one of the staff telling another table they were far busier than they had been at any stage this year, even during the regatta. That makes me feel very proud.”

Lorraine Hillier, who runs the Hot Gossip coffee house in Reading Road, said the festival has been good for trade.

She said: “When people were between events they’d come over in mini-surges to get tea and cake.

“It’s a boost for the town as a lot of people have come into Henley, which is what we need.

“And when people have come in they’ve been chatting to us and each other about the events they’ve been to, which is really nice.” Vivien Lee, owner of the Chocolate Café in Thames Side, said she had lots of booking from people wanting food between events.

Carl Edlind, of the Hart Street Tavern, said: “It has been good for business. We’ve been a lot busier at lunchtimes in the last week with people walking in and asking if we have a table available.

“We can hear they’re talking about the festival and who they’re going to see in the afternoon. So it has been good for business.”

Bethany Sutherland, manager of H café on Market Place said she had noticed a small increase in trade.

Among the other speakers were actress Hayley Mills who delighted her audience with tales from her memoir about her teenage years in Hollywood.

Jeffrey Archer was making his Henley debut while Boris Johnson’s former wife Marina Wheeler was talking about a family memoir recounting the story of her mother living through the partition of India.