The day Mr Brown ran out of cash 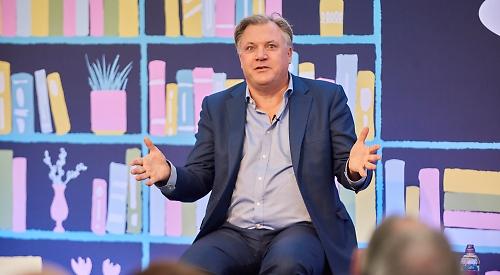 COMEDIAN Rob Beckett and former MP Ed Balls have something in common which I found out on Tuesday night at the Baillie Gifford Marquee at Phyllis Court when my wife dragged me along to see the South London-born comic.

Though not both Balls by name, they both had to have balls to get to the point of releasing their first books.

Earlier in the day I went along to the same marquee at the excellent Henley Literary Festival to sit in the presence of dad dancing Strictly star, Celebrity Best Home Cook winner, company chairman and former Shadow Chancellor Ed Balls.

Ed is extremely likeable and has lived up to that name by taking every opportunity presented to him with vigour and truly epitomises the spirit of carpe diem.

His new book, Appetite, is a strange combination of memoir, cookbook and insider recount of his life as a high-profile politician during the Blair-Brown New Labour era.

The cover shows a sweet-looking Ed aged five in 1972, complete with bowl haircut and cheeky smile — not all that far from the grown-up version sat in front of us.

Ed talks about food with passion and glee, recalling that his wife Yvette gave up cooking duties when their first child was born.

Ed’s stock of 60 or so recipes forms the backbone of the book, with joyful memories of particular meals cooked with love for his family over the years.

It started out as a pet project, written for his daughters and cleverly titled Dishes for my Daughters.

Ed is an affable chap and the conversation flows, almost without the need for an interviewer in the other seat.

He went on to recount a hilarious story about being on holiday with Gordon Brown in the south of France, playing tennis and bumping into Stephen Fry and Emma Thompson when Fry was “hiding” after running away from a theatre show he was in in the West End.

Gordon for some reason only had enough money to pay for coffees and one omelette and Balls, giggling, remembered Brown whispering furiously in his ear: “We haven’t got enough bloody cash to pay for them all for lunch!”

The way Ed has grabbed hold of his life is to be commended and he was pleased to recall that most people who bump into him in the street now are very friendly and see him as a normal person and not a politician.

One recent encounter apparently led to the person saying: “I used to hate you but I don’t any more.”

While Rob Beckett’s story is about coming from a working class background and making it in the middle class world of comedy, Ed’s rise to success is the more traditional one of a politician: Oxford followed by the John F Kennedy School of Government at Harvard.

But both men’s stories leave you feeling anything is possible and to that end you have to say they’re inspirational.

And that I think is the beauty of the Henley Literary Festival — it gives us all the chance to learn something new, be inspired by something we weren’t expecting and perhaps to step out from behind our own fears and try for ourselves. In short, to have balls.