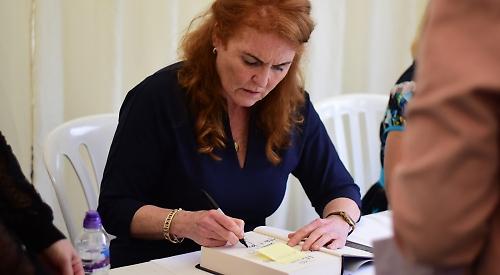 THE director of the Henley Literary Festival says this year’s event could not have gone any better.

More than 15,000 people attended 125 events over nine days of the 15th annual festival, which ended on Sunday.

Another 25,000 people watched the events that were also streamed online.

All of last year’s festival had to be held virtually because of the coronavirus pandemic.

Director Harriet Reed-Ryan said: “When we started planning we had no idea what sort of numbers we would get, so these figures are fantastic.

“It felt as though we’d never been away. The weather was on our side and the authors were fantastic. Everything went brilliantly and the response from the town was fantastic. I like to think that all the extra people coming to the festival have given the shops, pubs and restaurants a bit of help after the problems they have had to face.

“It was probably no different to a normal year but when it could have been much worse it is very reassuring.”

Venues, which included the town hall, the River & Rowing Museum, Christ Church and Phyllis Court Club, were not at full capacity to allow for social distancing.

Mrs Reed-Ryan said that planning the festival in the summer was a challenge.

“It was the great unknown,” she said. “We wondered if it would actually happen and that’s quite emotionally exhausting. Everyone was so delighted we went ahead and a lot of people have been thanking us.”

The festival was founded by her mother, Sue Ryan, and Mrs Reed-Ryan said: “From an idea that started at the kitchen table to where we are now is incredible but it’s not surprising because everyone works so hard.

“Everyone throws themselves in and that family connection started by my mum makes it a family atmosphere in the team and that’s vital.”

Mrs Reed-Ryan said her personal highlight was a talk given by Jane Garvey and Fi Glover, whose podcast Fortunately she listened to during the lockdowns.