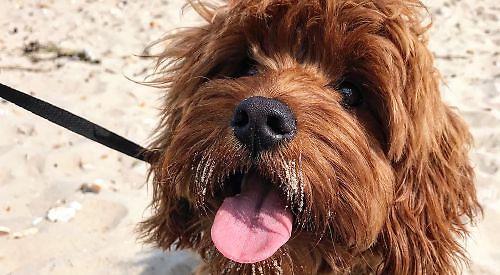 A FITNESS instructor who kept the nation active during the coronavirus pandemic took a shine to a dog during his appearance at the Henley Literary Festival.

Joe Wicks was one of the speakers at this year’s event when he bumped into Emma Lerche-Thomsen, who is a big fan. She was looking after her daughter Sophia’s cavapoo Bailey and took him along to Phyllis Court Club to hear Wicks before queuing to get a signed copy of his new picture book, The Burpee Bears.

Wicks took a shine to Bailey and posed for pictures with him, which he posted on social media.

Mrs Lerche-Thomsen, who lives in Remenham Hill and is a fundraiser for the Chiltern Centre in Henley, said: “I follow Joe on social media and I was inspired by what he did during lockdown and by the way he talks about his own mental health and fitness story. The way he talked to both adults and children at the festival was inspiring and I wanted to get my book signed.

“The queue was so long. I was the last person and when he spotted Bailey, Joe started asking a lot of questions about him and he took a picture of him, saying how cute he was — it was a lovely moment.

“Sophia has always loved dogs and adopted Bailey after finding out he was a returned lockdown puppy.

“He was returned for being too naughty. He is very cheeky but loveable and likes to chew everything in sight, with a preference for toilet rolls and the dustpan and brush.

“Joe was just how I imagined he would be — brilliant, bouncy and buzzing. He was just fabulous with the children and the adults. He took time to talk to the families and take pictures, which was really nice.”