Local acts to headline Music on the Meadows 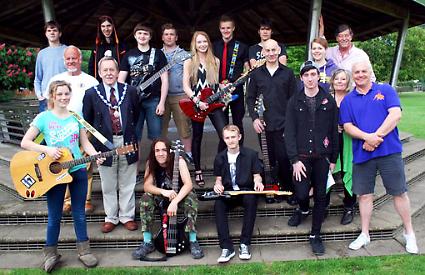 THE line-up for this years Music on the Meadows festival has been announced.

More than 20 bands or solo acts comprising mostly young people from Henley are playing at the event on July 20.

It will be held on the towns Mill Meadows from noon and performances will take place on the riverside bandstand.

Rapper Teelow Awojobi, who studies at The Henley College, will then perform, followed by the colleges jazz band and a drumming group.

This will be followed by rock and pop performances from Sophie Lloyd and bands Fish Hook, Ignite The Sky, Goin Loud, To Burn and Blossom, Launch Control and Random Article.

Gillotts School pupil and aspiring DJ Ross Duncan, aka The Stepper, will perform between sets for the second year running.

The Razzles, a Beatles tribute act, will headline the event alongside Henley singer Jayson Jaurigue.

The afternoon will be compered by Henley singer Jamie Bruce and Mollie Marriott, the daughter of Small Faces frontman Steve Marriott.

He said this week: It is lovely that teenagers and young people have this opportunity to perform to such a big audience once again.

The professionalism of last years performers was impressive. It makes you proud to live in Henley when you see how much talent there is.

The festival will be raising money to set up a youth drop-in centre called The Listening Roomz above Magoos in Hart Street.