Rebel crew's a Force to be reckoned with 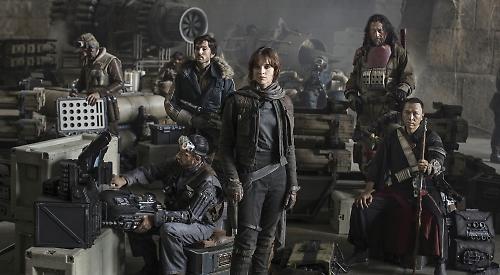 FORGET Academy Awards, introspective character studies and narratives that twist and turn the viewer this way and that.

Films of this nature certainly have an important place on our screens, but cinema, many would argue, is first and foremost a place for escapism.

Fewer films do a better job and have such phenomenal scope and vision than the Star Wars franchise. It’s no surprise, then, that Rogue One: A Star Wars Story has to be the most hotly anticipated release of the year.

After the huge success of last Christmas’s The Force Awakens, and the cult following that the films have, director Gareth Edwards is surely on to a winner. Rogue One is the first Star Wars Anthology film — a standalone story set shortly before the events of the original Star Wars.

In a time of conflict, a group of unlikely heroes band together on a mission to steal the plans to the Death Star, the Empire’s ultimate weapon of destruction.

This key event in the Star Wars timeline brings together ordinary people who choose to do extraordinary things, and in doing so become part of something greater than themselves.

Millions will visit cinemas this weekend to see how the next chapter of the franchise unfolds. With a following of this magnitude the team behind Rogue One will have to work hard to keep audiences happy.

Star Wars fans can be a critical bunch and nothing irritates them more than new additions to their beloved series that fail to pay tribute to the original films, wildly alter narratives to meet their own ends or superflous and quite frankly irritating characters. Think Jar Jar Binks.

Let’s hope Edwards has learned the lessons of Episodes I to III. While the films were praised for their visuals and music, the writing and characterisation came in for criticism.

This latest film will undoubtedly rake in the cash at the box office on the basis of its name alone, but the creative team behind Rogue One will surely want to create a film that stands the test of time and brings joy to generations to come.

Rogue One: A Star Wars Story is now showing at Henley’s Regal Picturehouse.