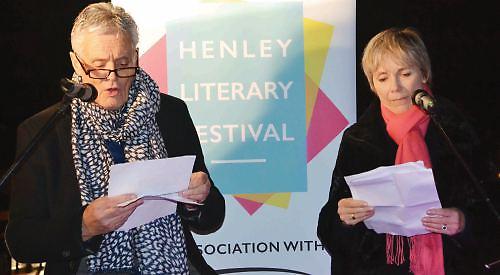 THE Henley Living Advent Calendar is on course for another record-breaking year.

The sixth annual event has raised more than £2,750 for charity in less than two weeks of festive performances in the town centre.

The identity of each act is kept secret until their half-hour performance, just like opening a door on an advent calendar.

Each evening is dedicated to a different charity, whose volunteers hold bucket collections and promote their work.

On Wednesday last week the world of Charles Dickens was brought to life on the top deck of The New Orleans when actor Simon Williams and his wife Lucy Fleming, from Bix, read from A Christmas Carol.

About 100 people gathered on the Hobbs of Henley boat and enjoyed mulled wine and mince pies.

The reading was followed by a performance by guitarist Laurence Beveridge who led the crowd in singing Christmas carols.

Williams, who also gave river readings at the Henley Literary Festival, said: “The festival is one of the things we’re most proud of to have on our doorstep.

“To come down here, drink mulled wine and read one of the best Christmas stories ever written is no hardship.

“I think it’s such a wonderful story, I’d like to read much more. We gave it a bit of welly anyway!”

The night was in aid of the Chiltern Centre for disabled children.

On the following evening, Lynne Butler and her 16-year-old son George Campbell sang and played ukuleles from the first floor window of Handelsbanken, off Greys Road car park, for about a crowd of about 100 people.

Ms Butler encouraged the audience to join in as she yodelled during a German drinking song.

The duo, who first performed together at the calendar five years ago, performed Wagon Wheel by Darius Rucker, Dedicated Follower of Fashion by The Kinks, Hotel Yorba by the White Stripes and Hallelujah by Leonard Cohen before closing with Merry Christmas Everybody by Slade and Merry Christmas Everyone by Shakin’ Stevens.

Ms Butler said: “We enjoyed it and I hope the crowd had a lot of fun. We’re starting to perform together more and our voices blend quite well.

“I think it was better than the last time we performed because we were not in the rain.”

The performance was in aid of Camp Mohawk in Wargrave.

Pachangas restaurant in Duke Street served snacks to the audience.

On Friday night the Phyllis Court Club Singers performed at the town hall accompanied by musical director James Church on the piano.

The audience of about 100 people heard a melody of Fifties hits, including Jailhouse Rock by Elvis Presley and Will You Still Love Me Tomorrow? by The Shirelles, and festive numbers including Let It Snow, Have Yourself A Merry Little Christmas and a reworked version of the carol While Shepherds Watched Their Flocks By Night.

The 30 singers were introduced by choir member Tony Horsfall who acted as compere throughout the set.

The performance was in aid of the Henley branch of Parkinson’s UK and was in partnership with chartered accountants Kench & Co, of Station Road, Henley.

Firefighters was due to perform but were unable to do so as some of them were unwell and others were working in Oxford.

The choir’s set included With a Little Help from My Friends by The Beatles, Last Christmas by Wham! and Merry Christmas Everyone.

As they performed, the singers moved with the music and clapped along to some of the songs.

Leader Lucy Hewes said: “We love doing the Living Advent Calendar. I think we have done it every year except one and it is a big favourite with our members.”

Michael Saunders, crew manager for the fire station, said: “The choir did a great job so I’m really pleased.”

The evening was in aid of Henley YMCA and was partnered with the Head Partnership solicitors.

On Sunday night 74 members of Steph’s Dancing Divas & Dudes emerged from the town hall to perform in front of the Christmas tree in Falaise Square.

Children aged 14 to 18 danced to songs including Dance With Me Tonight by Olly Murs and Merry Christmas Everyone, watched by a crowd of more than 200 people.

This was followed by members of the Henley Amateur Operatic and Dramatic Society performing a selection of festive classics including Carol Of The Bells and The Twelve Days Of Christmas.

The performance had to be suspended temporarily when Father Christmas made an impromptu appearance on his sleigh at the town hall, making four laps of the building and distracting the children in Falaise Square.

The performance was raising money for Building For The Future and was in partnership with insurance specialists Manning UK in Reading Road.

The Argyll pub served warm sausage rolls and mulled wine to the audience.

On Monday night, three young musicians performed to a packed crowd at Magoos in Hart Street.

Maya, 15, from Sonning Common, was dressed in a Christmas jumper as she performed the Beatles’ Real Love, which was used for the John Lewis Christmas TV advert in 2014.

Georgia, 19, also of New Street, performed one of her own songs, Faces, before finishing with Merry Christmas Everyone, encouraging the crowd to clap and sing along.

Maya said: “I found it really good. There was a nice atmosphere and a good audience.”

Georgia said: “It was fun, I wanted to try to get people going.”

The performance was in aid of Riverside Counselling and was in partnership with the Cook Curry Club, which served hot food to the spectators. On Tuesday evening about 20 pupils from Gillotts School sang Christmas songs in the garden at the rear of estate agents Simmons & Sons in Bell Street.

They are members of the Gillotts Voices lunchtime singing club.

The set included We Wish You a Merry Christmas followed by Hark! The Herald Angels Sing, Santa Claus is Coming to Town, We Three Kings, Frosty the Snowman, Deck the Halls, Silent Night and Ding Dong Merrily on High.

The children finished with The Twelve Days of Christmas in which they held up pictures of the gifts and the 50-strong crowd sang along.

Headteacher Catharine Darnton, who sang with the children, said: “It went brilliantly. It’s not an easy venue to sing in but I thought the students coped really well and there was a lovely atmosphere.

“We have done the Living Advent Calendar once before a few years ago when we had a drama performance. We were really delighted to have a slot again.”

Richard Rodway, chairman of the Henley Living Advent Calendar, said: “If we replicate the amount raised in the second half, we’ll have raised more than we have ever done before.

“Records are nice but what I’m interested in is making sure we continue to deliver enjoyable evenings with strong performers that are well received and well attended.

“Whatever we do we will have involved more charities than before, which is great.

“Musical performances by definition create atmosphere but we have had some completely different experiences.

“We’re now getting into the business end leading up to Christmas. Hopefully we’ll be ramping it up and people coming along will be full of festive cheer.

“The more people that turn out and have the festive feelgood factor the better the nights will be.

“I’m hoping we’ll make a lot of money for charities who haven’t had the chance yet.”

The charity initiative is sponsored by Higgs Group, publisher of the Henley Standard.

Other sponsors of the calendar include the Head Partnership solicitors, CTC-aspire and Philip Booth.

The Henley Business Partnership and Henley Town Council are also supporting it.