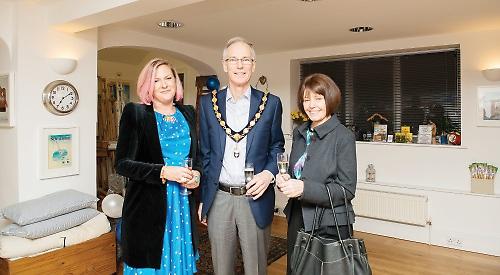 THE founder of Henley’s new art school says she has been overwhelmed by the support she has received.

Illustrator Jo Harris officially launched the Henley-on-Thames School of Art at The Studio, off Hart Street, on Friday night.

There were 180 guests including the Mayor and Mayoress Julian and Gabriele Brookes, students, models and tutors. Classes will begin on January 9. Miss Harris, of Newtown Gardens, Henley, said: “It was an auspicious and incredible start. Everywhere I looked there was a smiling face and excitement — it was wonderful.

“There was an overwhelmingly enthusiastic response. People have been saying ‘Henley has been really crying out for something like this’.

“I am so excited to have found such a perfect, central space for our school and to be opening up a place for artists and tutors to come and create.”

She has been running life drawing classes two evenings a week at Remenham village hall for the past three years but can now offer a wider choice of workshops and lessons.

Miss Harris is renting the former offices, which are located down the alleyway between Romans estate agents and Henley Hearing Care.