Duke, 95, is more than match for TV presenter 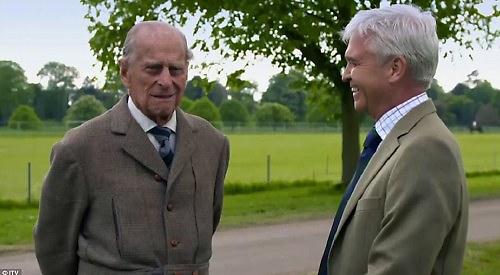 THE documentary about the Duke of Edinburgh that made Phillip Schofield late for a charity event in Henley last month has now been shown on TV — and it seems the presenter met his match in the royal.

Schofield, who lives in Fawley, was about 10 minutes late for the launch of the Chiltern Centre for disabled centre’s new Friends scheme, where he was the guest of honour.

He apologised to the crowd of waiting staff, volunteers, supporters and families, saying: “I’m sorry I’m late, I was with the Duke of Edinburgh — it’s a really good excuse!

“I’m making a documentary on the Duke of Edinburgh’s Award scheme. I was at St James’s Palace today waiting for him. You can’t really say, ‘will you hurry up, I’m going to be late’!”

The documentary, broadcast on ITV last week, was to mark the 60th anniversary of the scheme and Schofield interviewed the 95-year-old Duke, who is known for his sardonic wit.

When the presenter told him that he was going to take part in a wing walk to raise funds for the scheme, Prince Philip retorted: “Who is trying to get rid of you?”

He then added: “Are you going to stand there on the wing and say, ‘hello, folks’? I wouldn’t open your mouth if I were you in case it ends up like a balloon.” Schofield replied: “I’d get a mouthful of bees.”

Later, the presenter appeared to be worried after being summoned to St James’s Palace but in fact it was just
to meet a more experienced skydiver or, as the Duke put it, “a fellow idiot”.

Schofield, who co-hosts ITV’s This Morning, realised he had been outmanoeuvred, saying to camera: “He is as sharp as a pin.

“There was no question, more so than any interview that I’ve ever done in my life.

“I was just thinking, one false move, one wrong word, and he is going to be on me like a terrier.”

Perhaps he should have asked him to become a Friend…