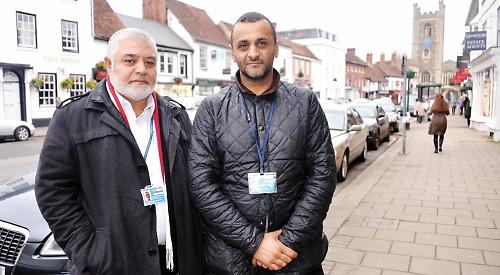 TAXI drivers in Henley have protested at plans to reduce the number of spaces at a town centre rank following complaints about their conduct.

The town council is set to ask South Oxfordshire District Council, the licensing authority, to remove two of the five taxi spaces along the southern side of Hart Street and replace them with regular parking bays.

Members of its traffic advisory committee heard that concerns had been raised by customers and staff at Barclays Bank, which overlooks the rank.

The drivers deny there is a problem and say the move would threaten their livelihoods and could affect elderly people who use a taxi to go shopping.

The committee heard that during the winter the cabbies often sit in their cars with the engine running, causing air pollution, and when it is warmer some drivers stand outside smoking cigarettes and discarding the butts on the pavement.

Councillor Lorraine Hillier, who received the complaint from the bank, said that women found it “intimidating” to walk past the drivers.

She said: “Sometimes there can be five cars there and little custom. Do we really need all of these during the daytime when there are taxi offices in Greys Road and Station Road? The bank would prefer short-term parking for their customers. Quite a few disabled people come to the bank and it is impossible to drop them off close by.”

Councillor David Eggleton said the drivers could use the taxi rank in Greys Road car park, which has six bays.

He said: “Sometimes there’ll be more than five taxis in Hart Street, so they take up the regular parking spaces and the drivers get very arrogant when they’re challenged.

“I was sworn at when I wanted to stop and drop off a parcel.

“They just keep feeding the meter and they’re a law unto themselves. If they move to Greys Road car park, they’ll have toilets nearby and with modern technology anyone can find their way to a taxi using an app.” Patrick Fleming, of the Henley Branch Users’ Group, said: “I once asked a driver why he was running the engine and told me he was cold but it was probably a good 12C outside.

“It’s actually illegal to park with your engine running so they need to be made aware of that, even if it’s hard in reality to enforce.”

The rank is operated by about 80 independent drivers, who say they need more space, not less, as the rank is too small to accommodate five estate cars.

Mohammed Saeed said: “It would be terrible for business if the rank was shrunk. If we had to go to Greys Road car park, who would see us? If you visit any other town you’ll always see taxis waiting with their engines on — it’s only here that we don’t do that.”

Ishtiaq Ahmed said: “We’re all humble people who just want to do our jobs quietly, respectfully and without causing any trouble.

“We all need to get out and stretch our legs a bit but we keep the rank very clean and provide a service to all kinds of people.”

Mohamed Parvaiz, chairman of the South Oxfordshire Taxi Drivers’ Association, said: “There are good reasons why the rank is there. Henley has a lot of elderly people who need it to be as close to the town centre as possible.

“The police also prefer it to be near the pubs and bars so that people can get straight in a taxi when they leave, which means there’s less trouble at night.

“Visitors during the Henley Royal Regatta can also find it easily whereas Greys Road car park is quite a walk.

“We’ve worked very hard to raise and maintain our standards and feel our drivers have a right to stretch their legs and chat with their friends.

“Barclays Bank doesn’t own the pavement and there could be similar complaints wherever you put the rank.”

A district council spokesman said: “Following concerns raised by a local business, we have spoken with the drivers’ association and are working with them to resolve the issues.

“We will carry out additional licensing enforcement activity to ensure drivers follow the council’s taxi policy. There are no current plans to reduce or relocate the rank spaces.”