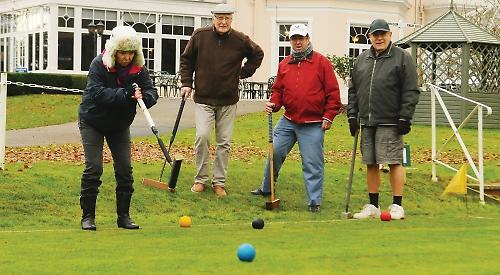 PHYLLIS Court Croquet Club is looking to build on a successful 2016 with an early start to their season last week.

Several players took advantage of the un-seasonally mild weather, all be it in hats and gloves rather than traditional whites.

Speaking this week, the club’s croquet chairman Chris Roberts said: ‘’It’s all about preparation for the season ahead.

“We have a number of members who play competitive croquet each week on national circuits away from Phyllis Court and some who even travel abroad for their croquet fix.”

Roberts, who is one of a number of players who keeps his croquet going all year round, added: “It’s no good hanging up your mallet at the end of September and expecting to pick up where you left off in the spring without any practice.”

Phyllis Court enjoyed their most successful run to date in the National Inter-Club Championship last year when a crowd of more than 100 watched their narrow defeat at the semi-final stage.

That was a record number of spectators of any British inter-club match, including finals, in the 33-year history of such events.

Phyllis Court will be hoping to match that cup run this year, or perhaps even go one better and reach the final. They are no strangers to such showpiece occasions, having seen their second string team end runners-up in the restricted second tier National competition in 2015. The club do not forget their social and pastime players and can boast one of the largest memberships of the country’s approximately 200 croquet clubs. Social mix-in sessions take place three times a week and the club also organise a raft of season-long competitions and day tournaments that are suitable for all skills levels.

Beginners’ training takes place in the first week of April each year and the club take pride in offering ‘something for everyone’.

Roberts added: “The idea is to a provide a positive croquet experience for all, and that might be anyone from the un-competitive social only player type right through to those with ambition to reach the very top of the sport.

“Our top player Charlie von Schmieder, from Checkendon, played in the world team championship for Ireland last year, and at the other end of the scale we have two social players still enjoying their croquet into their nineties!”